ACHIEVING WATER BALANCE: Drought, forest fires and floods in 2003 created a “teachable year” for change in British Columbia, got the ball rolling for the Convening for Action in British Columbia initiative, and led directly to the “Water OUT = Water IN” paradigm-shift for water supply management in a changing climate (April 2005)

March 21, 2021 - Posted in 2005 Penticton Water OUT = Water IN Workshop, Convening for Action in British Columbia

In 2003, British Columbia experienced one “teachable moment” after another, highlighted by the Okanagan forest fires that resulted in mass evacuations and widespread destruction in the City of Kelowna and surrounding areas. The impact of this “teachable year” was to set in motion a series of outcomes that have rippled through time.

First came the Water Sustainability Action Plan, released in February 2004. Then came release of British Columbia’s Drought Response Plan in June 2004. This was followed by the Provincial Drought Forum held in July 2004 in Penticton. The combination of these four milestones generated the momentum within the provincial government to organize the technical transfer session titled Demand Management Strategies: Achieving Water Balance, held in April 2005, again in Penticton. 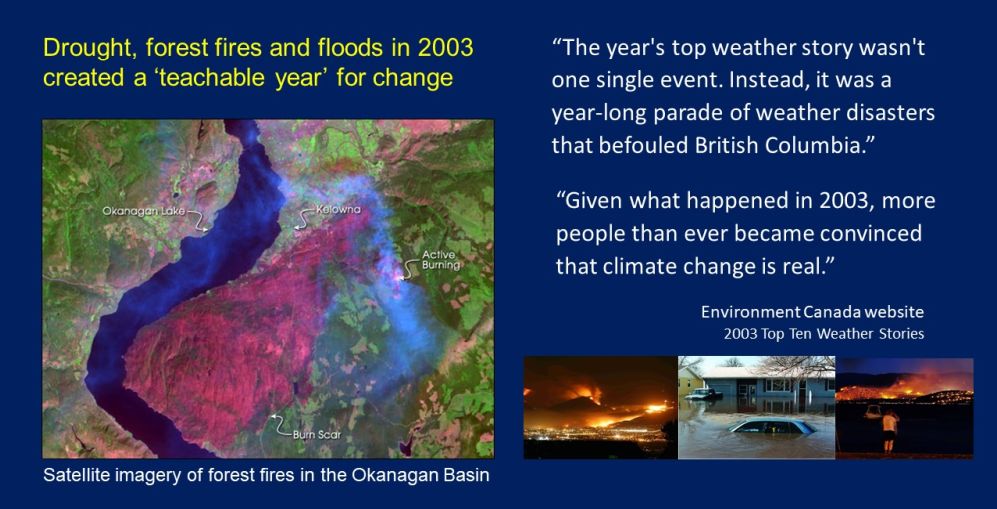 Restore the Balance in the Water Balance

At the time, Jim Mattison  was the LWBC Executive Director. He was also Comptroller of Water Rights. When LWBC was re-integrated into the Ministry of Environment after a government reorganization in 2005, Jim Mattison was appointed Assistant Deputy Minister.

“The science is ahead of the policy,” Jim Mattison stated in a 2005 interview about the implications of a changing climate. He made the decision that the Achieving Water Balance Workshop would be co-hosted and co-organized by LWBC and the Partnership for Water Sustainability as a Drought Response deliverable. He also approved the program concept for a technical transfer session that became the forum for introducing the Water OUT = Water IN way-of-thinking to a BC audience.

“The severe drought of 2003 in British Columbia is evidence that the historical approach of supply management for water resources is not sufficient. To address this issue the Deputy Ministers’ Committee on Drought was formed in August 2003, followed by the creation of a Drought Management Action Plan. One important component of the Action Plan is the development of the document, Dealing with Drought: A Handbook for Water Suppliers in British Columbia,” stated Jim Mattison at the Penticton Drought Forum in July 2004.

“As so often, it is the conversations that happen outside the formal settings that plant seeds and set wheels in motion,” recalled Kim Stephens. “At the conclusion of the forum proceedings, several of my colleagues and I were part of a conversation with the three ministers. Looking back, I realize just how quickly things happened in the months following. By September, for example, LWBC rolled out a series of workshops to help water suppliers develop drought management plans.”

“To build on  the Penticton forum, I recall there was a suggestion about getting a drought management session on the UBCM agenda for the annual convention. This gathering of local government elected representatives was two months away in September 2004. Although this suggestion was subsequently explored, there was insufficient time to make it happen, especially since the convention program was already set.”

The Idea for Achieving Water Balance

Water OUT = Water IN way-of-thinking

“Instead, and at the prompting of  WALP’s Lynn Kriwoken, the idea took hold to follow-up the initial Dealing with Drought workshop series with a technical transfer session that would be co-hosted by LWBC and the Partnership. Lynn Kriwoken played an instrumental role in the creation and launching of the Water Sustainability Action Plan. Her advocacy within government alerted Wenda Mason to the potential synergies in collaborating with the Partnership. By the beginning of November 2004, it was a done deal to co-organize the Achieving Water Balance Workshop,” continued Kim Stephens.

“The continued growth of communities and economies within BC had placed more serious pressures upon using, accessing and allocating BC’s water resources,” continued Wenda Mason. “Lavishly high volumes of per capita water use, continued community and economic expansion, plus baseline environmental needs were all competing for their share of BC’s finite, but renewable, water resources. What could be intended as short-term solutions or beneficial legacies could easily become the operational nightmares of future generations. The era of supply-side management was drawing to a close.”

“We also saw this technical transfer session as furthering the our regional conferences ‘build up’ strategy leading to the water round table that was one of the six core element of the Water Sustainability Action Plan,” added Lynn Kriwoken. “A key objective was to design audience participation into the program rather than simply presenting at people.”

Back to the Water Balance: Out = In

“The draft title for the technical transfer session was Demand Management Strategies – “Win – Win” for Suppliers and Customers,” recalled Wenda Mason. “It was Robert Hicks who challenged Kim Stephens and me to focus on what we really wanted to achieve with the workshop, and what would make it different and compelling. At Robert’s urging, we amended the title to Demand Management Strategies – Back to the Water Balance: Out = In!“

“This one change proved to be profound. The three of us had to develop a common understanding of what the idea of Water OUT = Water IN actually meant. Only then could we begin building a program. The three of us spent many hours on the phone together over several months. It took time to work our way through the logic and the nuances. Robert emphasized the importance of it being framed as OUT = IN, not vice versa. The key to effective communication was that Robert created a simple visual to convey complexity in a way that ultimately made it easy for us to explain and for an audience to absorb. The rest is history,” concluded Kim Stephens.

Download a copy of the agenda for the Water Use & Conservation Forum.

Download a copy of the Drought Management Update – Open Meeting of the BC Cabinet, May 2004

Download a copy of the news release, agenda and timeline for the 2004 Dealing with Drought Workshops.

Download a copy of Water Sustainability Action Plan – An Overview (2005)

Source: Open Meeting of the BC Provincial Cabinet on May 31, 2004 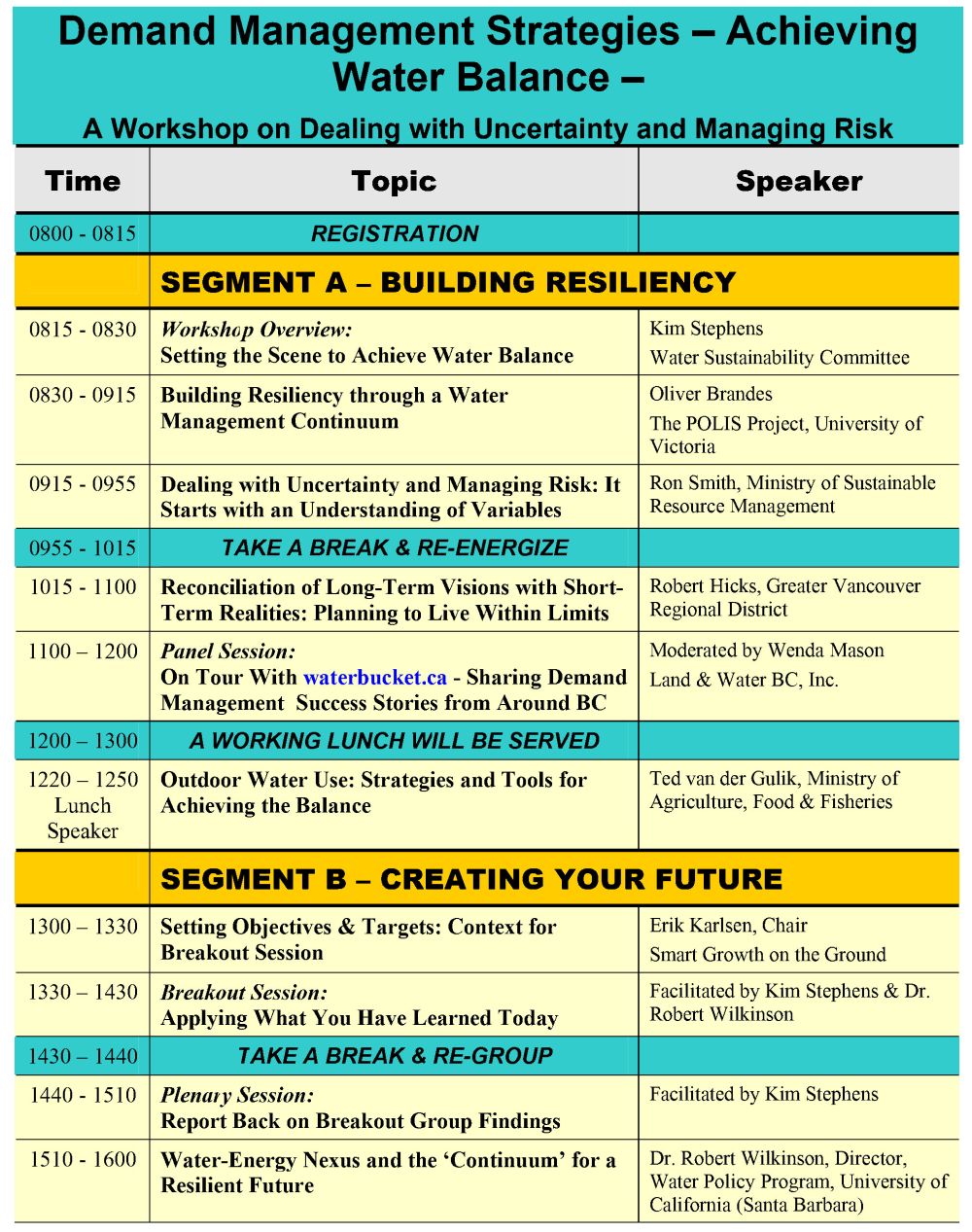