2ND ANNUAL SYMPOSIUM ON PLANNING FOR RESILIENCE: “Inspired by Buzz Holling, BC’s Stormwater Guidebook established an adaptive management precedent. A decade later, Buzz and I had a reflective conversation after his keynote address at UBC. He further inspired me,” stated Kim Stephens when he represented the Water Sustainability Action Plan as a panel member on Uncertain Water Supplies (March 2010)

2010 was a ‘watershed year’ for the Water Sustainability Action Plan, with outreach taking place at 10 major events in three regions, to provide peer-based learning for Living Water Smart, Building Greener Communities, and Adapting to a Changing Climate. The second of these events, held in March 2010 and hosted by the School of Community and Regional Planning at the University of British Columbia, was the ……

The Symposium included a broad range of panel discussions with a diversity of perspectives from students, practitioners, and academics. One of the panels dealt with water. The panel theme was Increasing the Resiliency of Development to Water Crises. The panel comprised two practitioners (Deborah Harford of Simon Fraser University; Kim Stephens representing the Action Plan) and two Master’s students (Nancy Pepper; Kirsten Harma).

Pioneering the ‘Science of Surprise’

Buzz Holling (1930-2019), considered the father of resilience research and recognized as one of the world’s leading ecologists, was the keynote speaker. He collaborated with experts outside of universities and research labs to understand land development, forest management, and pest management. It was from these experiences that he first began to formulate his ideas about resilience, which he called the ‘science of surprise’.

One of the talents of Buzz Holling was his ability to bring people together to understand, assess and act on new solutions to complex problems of people and nature. The Resilience Alliance, an international research organization founded in 1999, was one of his ‘experiments’.

“My first contact with Buzz Holling was in 1999. An assignment for King County allowed me to delve into the origins of adaptive management, and research experience around the world. Specifically, we were looking for a local government precedent, and there was none. This led me to phone Buzz. A decade later, in 2010, it was an inspirational experience when we met and had a reflective conversation at the UBC symposium.”

“In 1999, my Aha Moment was realizing that our cross-border response to the ‘salmon crisis’ in the Pacific Northwest paralleled the efforts of Buzz Holling and Lance Gunderson related to Florida Everglades Restoration.

“They were great communicators, they used imagery to translate the science so that folks could understand it, and they undertook a workshop program that informed, educated and inspired government action.

“In the late 1990s, Bill Derry (founding Chair, Washington State Stormwater Managers Committee) and I led a workshop program for B.C. local government, and provided cross-border sharing of the latest Puget Sound research. Early access to the research findings allowed us to create what became known as the ‘fish pictures’.

“The workshop program led to the SmartStorm Forum Series during the period 1999-2001. In turn, the series provided the impetus and springboard for Stormwater Planning: A Guidebook for British Columbia.”

“When I reflect back on what I have learned in my career, I believe that clear thinking is needed more now than ever,” stated Kim Stephens. “Time and time again, I have seen how we create layers of complexity around assumptions. One of my rules of thumb is that, if you take any kind of initiative, drill down and peel back the layers of the onion until you get down to the simple assumption. So often, it tends to be flawed. Ask a different question and you will get a different answer.

“Over the past decade or so, there has been a prevailing mindset that there is only one right answer. But as you heard from Buzz Holling (in his keynote address), things are unpredictable. It seems that we have lost sight of that reality. That may be because we have become so dependent on computers. They are great, but they do not replace judgment.” 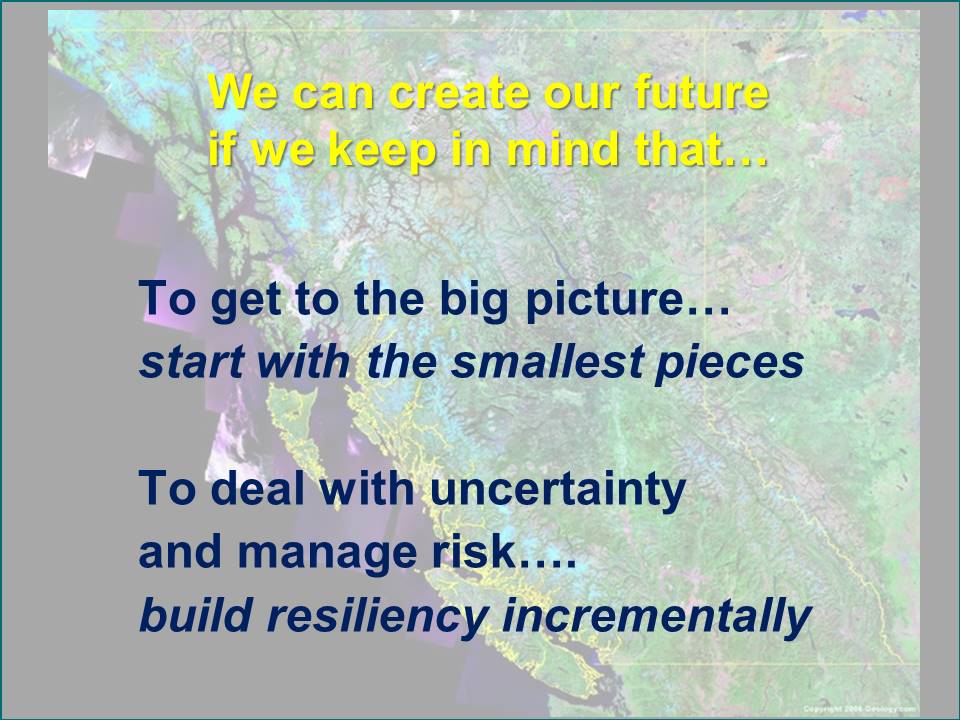 Watch Kim Stephens explain how to get to the big picture (1:32 minutes):