2010 was a ‘watershed year’ for the Water Sustainability Action Plan, with outreach taking place at 10 major events in three regions, to provide peer-based learning for Living Water Smart, Building Greener Communities, and Adapting to a Changing Climate. The third of these events, held in June 2010 and hosted by Vancouver Island University, was the …… 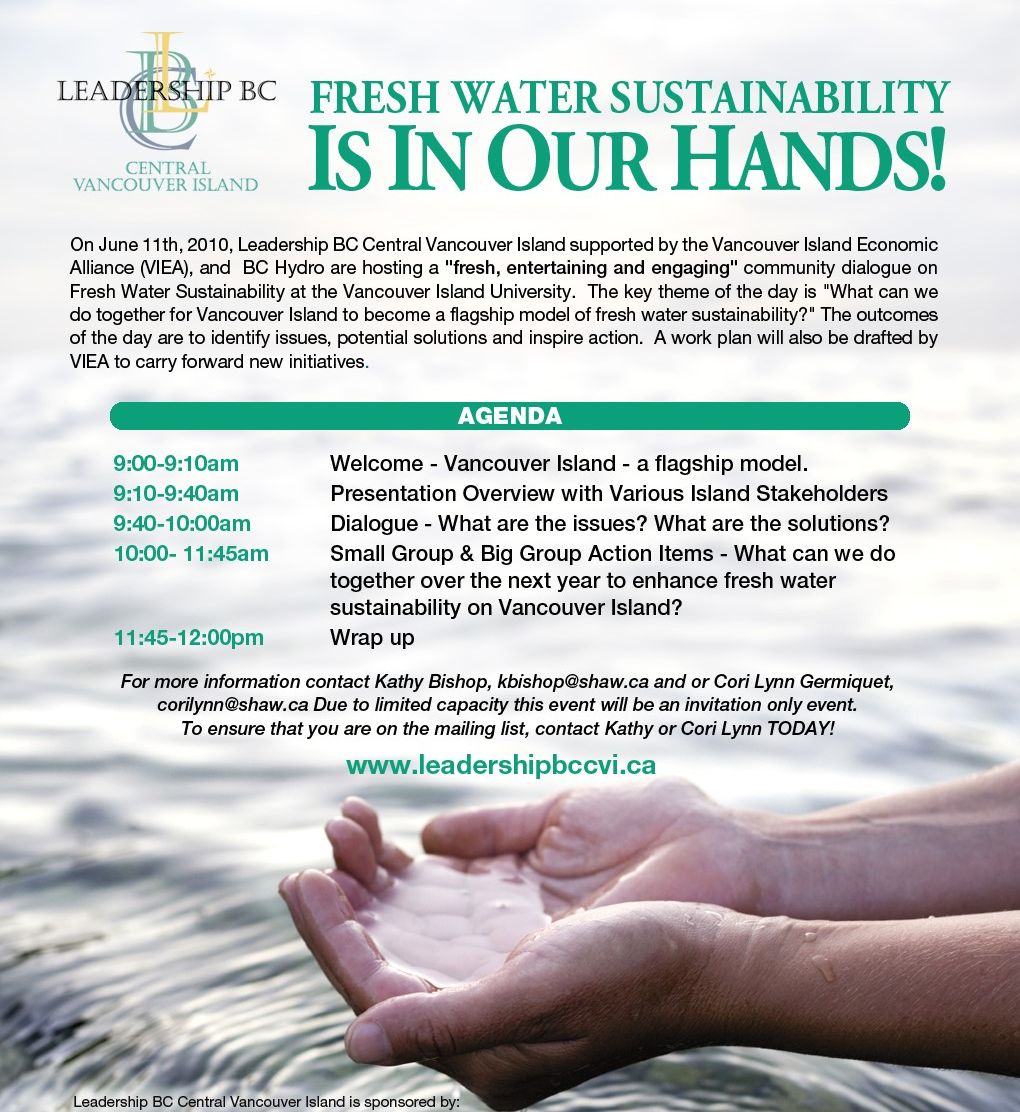 The Dialogue in Nanaimo was organized and facilitated by Kathy Bishop, Chair of the Curriculum Team for Leadership BC Central Vancouver Island, She recruited a team of and knowledgeable individuals who were willing to participate in an ‘improv theatre’ format rather than make formal presentations.

“Leadership BC was launched almost a decade ago to provide a curriculum framework and process designed to develop the leadership capabilities of citizens who care about their community. This year, 2010, the Board decided to do something different and take on our own project. We choose water sustainability as our focus and decided to host a Dialogue in Nanaimo.” 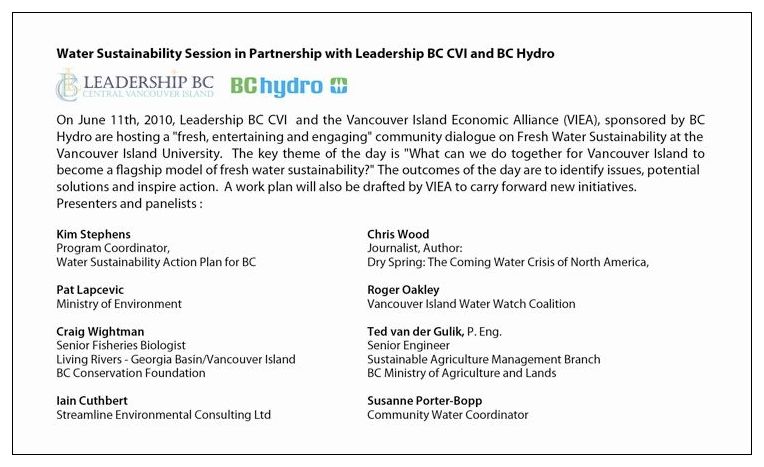 The Story Behind the Story

“Kathy Bishop reached out to the Partnership for Water Sustainability in January 2010 when she learned about the CAVI, Convening for Action on Vancouver Island program. Everyone remembers the CAVI acronym, but few are aware that the CAVI tagline was Leadership in Water Sustainability. That was the raison d’être. As Kathy noted in her initial email to me, she wished to build upon the good work of the CAVI program,” recalls Kim Stephens, Partnership Executive Director.

“Within a week, three of us met with Kathy and the die was cast. The Partnership bought into the vision for the Dialogue in Nanaimo. ‘It is marvelous we are on the same page and I look forward to evolving our June 11th event together’, stated Kathy in an email exchange that confirmed our mutual commitment to collaborate.

“Subsequently, Kathy organized several sessions where Ted van der Gulik, Eric Bonham and I met with others who Kathy had recruited. Her focus was on getting us to share stories that would enable and inspire individuals and organizations to reflect and shift practices, understand relationships and responsibilities between others and the environment, and promote community water related action.

“It was a team-building process, with the objective of becoming comfortable with the ‘improv format’. Kathy was doing her PhD at the University of Victoria, and we were part of her applied research. We came together as a team, and our camaraderie was on display for all to see on the day of the Dialogue.”

Download a copy of Who’s Who – Fresh Water Sustainability Presenters.

To read the complete story of stories posted on the Vancouver Island community-of-interest, click on 2010 Dialogue in Nanaimo.

Watch the video of the seven members of the Fresh Water Sustainability team engaged in the ‘improv theatre’ format.

“Kathy Bishop worked with the team to develop a script,” continues Kim Stephens. “The format was for her to ask questions, and for us to share our stories. In other words, there was structure, yet it was spontaneous. It was our team-building sessions that provided Kathy with the material that she needed for the script.

“The Partnership was all-in to do what we could to ensure the success of the Dialogue in Nanaimo. We spread the word through our weekly e-newsletter. To this end, Eric Bonham framed the vision for ‘convening for action’ as follows:

“We have to move beyond the technical and the engagement of local governments towards a universal commitment to sustainability on Vancouver Island. Taking the greater context as Vancouver Island, I believe we are now ready to take the next step towards engaging the public, business, schools and community organizations in a united front to play their respective role in sustainability initiatives based upon the fundamental requirement of water sustainability.

Why not follow the leadership of  Chemainus….”the little town that did” and expand the vision to “the island that did”. I believe as citizens we have both an individual and collective role to play in responding to the question “What do we want Vancouver Island to look like in 50 years?”

“The ‘Dialogue in Nanaimo’ was the venue for the formal launch of Beyond the Guidebook 2010. John Finnie, CAVI Chair and the General Manager of Regional and Community Utilities for the Regional District of Nanaimo, made the announcement on behalf of the ‘convening for action’ partnership.

Watch John Finnie make the Beyond the Guidebook 2010 announcement: