FLASHBACK TO 2010: “A vision with a task is the hope of the world,” stated Kim Stephens in his panel presentation about Uncertain Water Supplies at the 2nd Annual Symposium on Planning for Resilience hosted by the UBC School of Community and Regional Planning

The School of Community and Regional Planning at UBC (SCARP) held its 2nd Annual Symposium on March 5, 2010. The theme was Planning for Resilience. The day included a broad range of panel discussions with a diversity of perspectives from students, practitioners, and academics drawing from Planning, Architecture, Journalism, Geography, Resource Management, Landscape Architecture, Engineering, and more.

Buzz Holling (1930-2019), considered the father of resilience research and recognized as one of the world’s leading ecologists, was the keynote speaker. He made major contributions to the theory of predation, the concept of ecological resilience, the concept of panarchy, and adaptive management. Scroll down to watch a YouTube video featuring Buzz Holling.

Resilience is the capacity of a system to absorb disturbance and still retain its basic functions.  Resilience thinking and doing is about understanding and engaging with a changing world.  Some have argued that it is a deceptively simple idea, but its application to systems of humans and nature has proven elusive. How can we plan for resilience?

Resilience, initially rooted in ecology, is defined by C.S. (Buzz) Holling as the “measure of the persistence of systems and of their ability to absorb change and disturbance and still maintain the same relationships between populations or state variables”.

A resilient system is formed by the dynamic interplay between static forces and random events, structural factors and human agency, linear paths and contingency. Such diversity and variability allow resilient systems to absorb unforeseen shocks, bounce back by continually adapting and evolving so as to resist collapse.

″He lived a remarkable life of creativity, discovery, scholarship and service to humanity,” Lance Gunderson wrote in a tribute to Buzz Holling. He and Holling co-authored two books. “He was a rare combination of artist, scientist, teacher and practitioner who touched and inspired many colleagues. One of his talents was an ability to bring people together to understand, assess and act on new solutions to complex problems of people and nature.”

One of the panels dealt with water. “Water issues have become a source of major concern globally. We included a water panel to look at how we need to change development, water demand and water provision in order to increase resiliency against water crises,” stated Nancy Pepper, the SCARP masters student whose responsibility it was to co-organize the water panel.

“The theme for our panel session was Increasing the Resiliency of Development to Water Crises,” reported Nancy Pepper. “Three questions framed the learning outcomes for the session.”

“What potential crises is British Columbia facing presently or in the future regarding water? What is the state of current Provincial policies? What changes do we need to be making and what lessons can we learn from other areas facing similar challenges?

“We have received a variety of feedback on the panel session, all of which was immensely positive,” concluded Nancy Pepper. 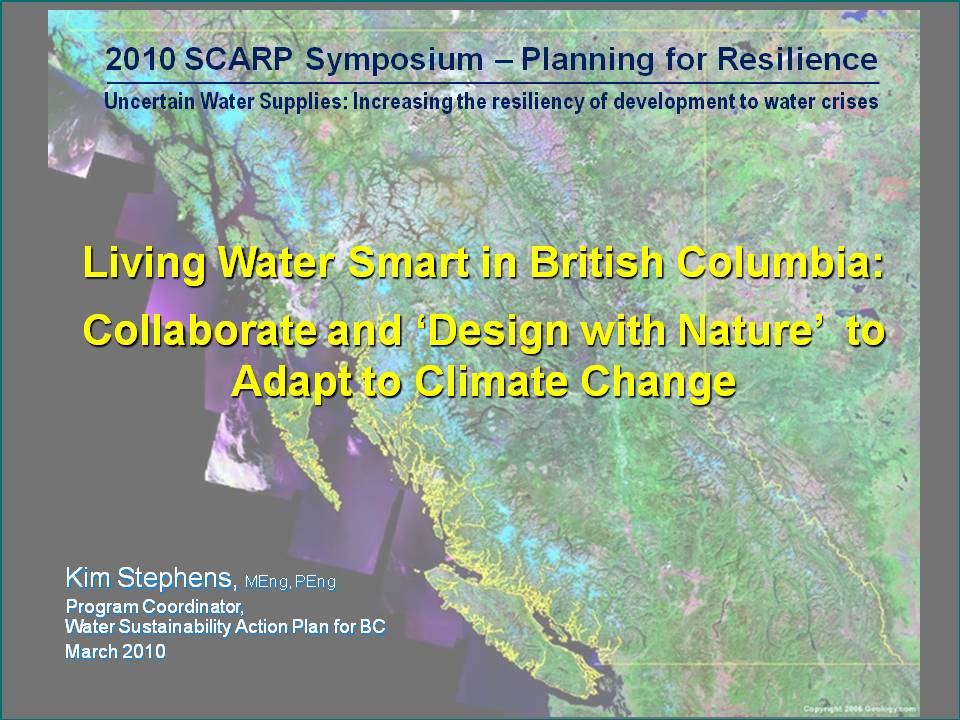 “We invited Kim Stephens to be part of the water panel because of his vast experience. I had read Stormwater Planning: A Guidebook for British Columbia while researching water-centric urban design and found it to be a great resource,” stated Nancy Pepper.

Kim Stephens was project manager and principal author of the Stormwater Guidebook. Released by the Province in 2002, the Guidebook set in motion a chain of outcomes that has resulted in British Columbia being recognized internationally as a leader in implementing a natural systems approach to rainwater management in the urban environment.

Kim Stephens has received international recognition for his pioneering efforts and has been invited to speak on ‘the British Columbia experience’ and make keynote presentations at forums in Australia and throughout North America.

“A key consideration leading to my acceptance of the SCARP invitation was the opportunity to at last meet Buzz Holling, the keynote speaker for the Symposium,” stated Kim Stephens.

“In my mind, Buzz Holling is a living legend. He and Carl Walters pretty well invented the science of Adaptive Management some 40 years ago when they were both at UBC. Later, Buzz moved to Florida where he was a driving force behind the Everglades restoration.

“When Bill Derry and I wrote a discussion paper on Adaptive Management for King County in 1999, Buzz Holling was our primary reference source. Ever since, his work has influenced my thinking.

“Adaptive management is at the heart of the Stormwater Guidebook. This was a pioneer application in a local government setting. In the Guidebook, we placed the emphasis on learning by doing.”

“The storyline for my SCARP presentation comprised three parts,” continued Kim Stephens. “In the first part, my objective was to capture audience attention and quickly build to the Design with Nature mind-map.”

“Then I stepped back to introduce five Georgia Basin initiatives that demonstrate action on the ground by local governments. In this part, I briefly told the story of the Bowker Creek Blueprint because of its provincial significance. The Bowker Creek watershed is in the urbanized heartland of the Capital Region.

“I wanted to leave the audience with a clear take-away message. So I concluded my presentation on a philosophical note by quoting the epitaph from an 18th century tombstone in England. It is crucial to have a vision, but at the same time you have to be grounded. I linked this to our build a vision, create a legacy mantra for the Guidebook.”

To download a PDF version of the PowerPoint presentation by Kim Stephens, click on Living Water Smart in British Columbia: Collaborate and ‘Design with Nature’ to Adapt to Climate Change.

To view his entire 15-minute presentation on YouTube, click on the first image. Or, selectively view the series of short clips (of between one and two minutes length) that follow.

Hands Across the Malahat:

Build the Vision, Create a Legacy: