Towards Water Sustainability on Vancouver Island: “SO WHAT are the ways we inform, inspire and enable people to work together through partnerships to ACT NOW?”

Launched in 2006 at the Water in the City Conference, CAVI is a regional initiative of the Partnership for Water Sustainability in British Columbia, a not-for-profit society.

In 2016, on the 10th anniversary of the transformational “Meeting of the Minds” event, CAVI was re-branded as the The Partnership on Vancouver Island: Leadership in Water Sustainability. Program delivery continues under the umbrella of the Water Sustainability Action Plan for British Columbia.

READ: “CAVI” is moving forward under a new name – The Partnership on Vancouver Island: Leadership in Water Sustainability.

It Started with Two “Meeting of the Minds” Consultation Workshops

Consultation workshops were held in September 2005 and May 2006, both times in Parksville.

“Both times these events brought together approximately 35 participants from a range of agencies which have a water and/or wastewater focus. Both events were by invitation because we were proactively seeking the participation of individuals who are committed to action. The goal in convening was to build an effective long-term communications network,” recalls Eric Bonham, a driving force in organizing the Meeting of the Minds workshops.

We are convening for action!

“The Meeting of the Minds initiative then evolved into Convening for Action on Vancouver Island, and is now known by the acronym CAVI,” continued Eric Bonham.

“Under the umbrella of the over-arching Convening for Action in British Columbia program, a CAVI consultation workshop was held as an adjunct to the Water in the City Conference, held in Victoria in September 2006. Participation was by invitation.” 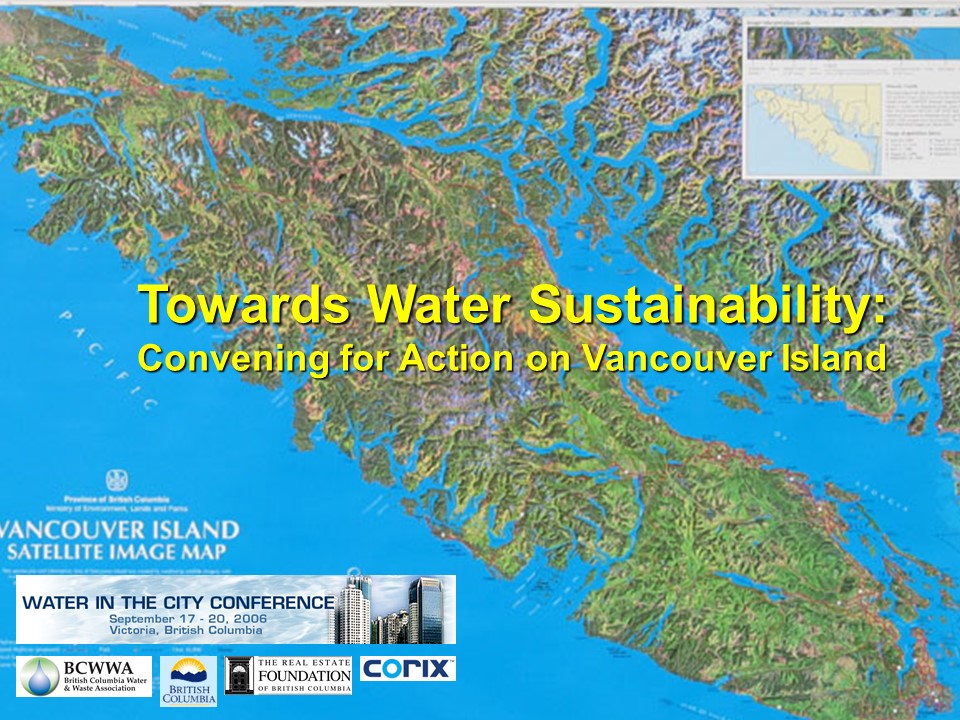 Towards Water Sustainability on Vancouver Island

“The consultation workshop  provided a timely opportunity to test and validate an approach that can bridge the gap between awareness (interest) and action (practice),” concluded Eric Bonham.

To provide the breakout groups with context for their brainstorming, Erik Karlsen addressed this question:

“SO WHAT are the ways we inform, inspire and enable people to work together through partnerships to ACT NOW?”

In addition, he introduced possible elements of a water-centric framework for land development approvals. He provided workshop participants with this mind map:

After the breakout groups reported out in a plenary session, John Finnie closed the workshop with a look ahead: “This first workshop has served a useful purpose in getting the ball rolling for a Vancouver Island pilot program. It is the first step in an educational and consultative process. ‘Towards Water Sustainability’ is now formally launched.

Invitees were provided with a handout package in advance of the workshop so that they would be prepared to participate in a conversation. To download a copy, click on this link to the Workshop Handout Package.

For the complete story on the workshop design and outcomes,click on ‘Convening for Action on Vancouver Island’ Launched at Water in the City Conference.

Download Towards Water Sustainability on Vancouver Island to view the PowerPoint storyline for the day.