Coquitlam River Watershed Roundtable: Keynote presentation by Kim Stephens at the June 2017 Community Meeting connected the dots to the call to action by the legendary Ian Mcharg in his classic book “Design with Nature” (1967)

On June 10, 2017, the Coquitlam River Watershed Roundtable convened a Community Meeting for the purposes of discussion about sustainable watershed management in the Coquitlam River watershed and in watersheds across the province, alongside local and regional politicians, First Nations, water users, environmental stewards, real estate developers, and members of the public.

The Community Meeting was attended by representatives of three levels of government (federal, provincial and local). The keynote presentation was delivered by Kim Stephens, Executive Director of the Partnership for Water Sustainability in British Columbia.

What Happens on the Land Matters!

The keynote presentation was structured in two parts. In the first part, Kim Stephens talked about the Regional Team Approach and its relevance when describing the accomplishments of the Coquitlam River Watershed Roundtable.

In the second part of the keynote, Kim Stephens introduced the Roundtable audience to the Partnership for Water Sustainability’s vision for Sustainable Watershed Systems, through Asset Management.

Before speaking to these two themes, however, Kim Stephens connected the dots to the work of Ian McHarg a half-century earlier.

Click on What Happens on the Land Does Matter! – Moving Towards “Sustainable Watershed Systems, through Asset Management” to download a PDF copy of the complete PowerPoint presentation by Kim Stephens.

“Design with Nature” because everything is connected!

“There is a cycle,” stated Kim Stephens. “We learn. We forget . We re-discover. When I graduated from university in the 1970s, the big idea was systems thinking. And then we seemed to lose sight of that way of thinking.

“Systems thinking actually was not a new idea in the 1970s. We had discovered what President Teddy Roosevelt and John Muir had understood in 1903. There is a famous photo of the two of them camping atop Mount Yosemite when John Muir made his successful pitch to the President to create the United States national park system.

“John Muir had said ‘everything is connected’. It is a famous quote. Every 50 years or so we have to re-discover that everything is indeed connected.

“In 1967, Ian McHarg wrote Design with Nature. It was published in 1969. It is fascinating to read the Preface to the 25th anniversary edition because McHarg provides his reflections on what led him to write the book, and the state of understanding at that time.

“In 1967, wrote McHarg, science had not yet discovered the environment. This statement provides a perspective on how far WE have come in only 50 years.

“Design with Nature aspired to satisfy several obvious deficiencies, wrote Ian McHarg. The first, he stated, was the absence of any knowledge of the environment in planning – this was a totally applied socio-economic process.

“The next omission, continued Ian McHarg, was the lack of integration within the environmental sciences.

“As the keynote speaker, I am here to inform you, to inspire you, to create some enthusiasm, and to provide some food for thought. So in my presentation I am touching upon a number of dots,” emphasized Kim Stephens when he concluded his opening segment.

“The ‘regional team approach’ is founded on partnerships and collaboration; and seeks to align actions at three scales – provincial, regional and local,” explained Kim Stephens.

“Insertion of the word team in ‘regional approach’ has had a profound impact on how practitioners view their world. Team implies there is personal commitment; it also suggests there is a game plan and a coachable context. The regional team approach is proving to be a powerful motivator.

“Everyone needs to agree on expectations, and how all the players will work together, and after that each community can reach its goals in its own way.”

Funded by the governments of Canada and British Columbia through 2018, the program for Sustainable Watershed Systems, through Asset Management is designed to bring state-of-the-art hydrology into engineering standard practice, explained Kim Stephens.

By proving out a methodology, added Kim Stephens, the program is setting the stage for integrating ‘watershed systems thinking’ and adaptation to a changing climate into Asset Management for Sustainability Service Delivery: A BC Framework.

Kim Stephens is an engineer-planner. His four decades of experience cover the spectrum of water resource and infrastructure engineering issues. He specializes in public policy and its implementation, and has played a leadership role in a series of initiatives in British Columbia related to water sustainability, rainwater management and green infrastructure.

Since 2003, Kim has been responsible for developing and delivering the Water Sustainability Action Plan for British Columbia, the partnership umbrella for an array of ‘top down & bottom up’ initiatives that promote a water-centric approach to community planning and development.

Kim Stephens has received international recognition for his pioneering efforts and has been invited to speak on ‘the British Columbia experience’ and make keynote presentations at forums in Australia and throughout North America. 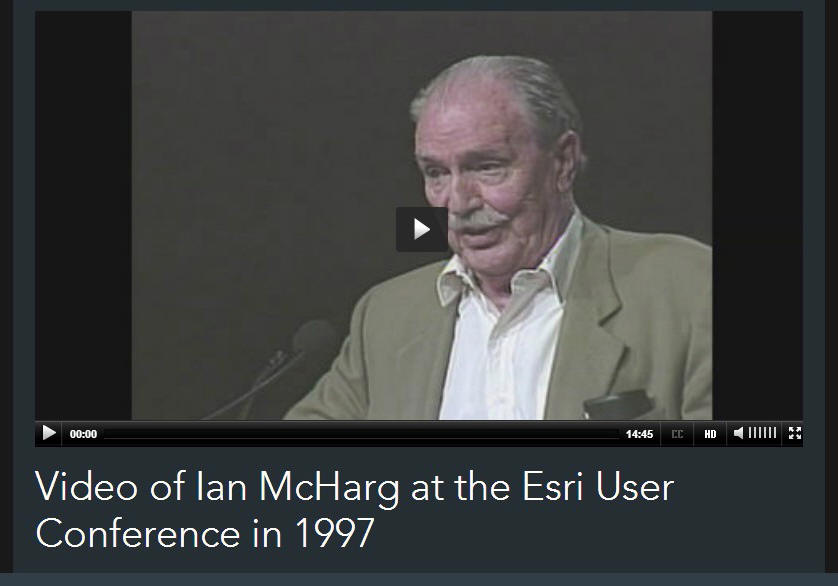 To view the video, visit: http://video.esri.com/watch/127/video-of-ian-mcharg-at-the-esri-user-conference-in-1997

Green, Heal and Restore the Earth