FLASHBACK TO 2009: “Getting Green Infrastructure Built Right in the City of Surrey: Moving Beyond Pilot Projects” – the theme for Metro Vancouver Water Balance Forum 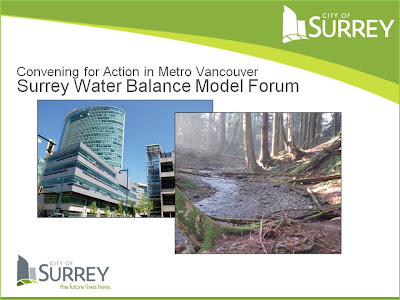 In March 2009, the program for the Metro Vancouver Water Balance Model Forum was built around the HOW question as it pertains to green infrastructure:

The City of Surrey has extensive experience with development and implementation of Master Drainage Plans (MDP) and Integrated Stormwater Management Plans (ISMP). Now in its fifth decade of continuous implementation experience, the City continues to evolve and adapt a watershed–based approach that incorporates lessons learned in getting green infrastructure built right.

The City of Surrey hosted the Water Balance Model Forum because we wanted to start a dialogue between policy-makers and project implementers,” states Vincent Lalonde, the City’s General Manager, Engineering. “We approached the program design from a shared responsibility perspective; we explored how policy and legal tools can help developers, regulators and designers collaborate to ensure responsible outcomes.”

“We wanted the policy people to have an appreciation for what is involved in constructing green infrastructure; and we wanted the implementers to understand what the provincial, regional and local goals are….and what we are trying to achieve in Surrey through the use of policy, approved standards and legal tools.”

“Once we know what we want our watersheds and neighbourhoods to look like, the next step is to decide what the tools are that will get us there. All of us ….whether we are regulators, developers or designers ….need to understand and care about the goal if we are to create the future that we all want,” concludes Vincent Lalonde.

The 2009 Forum was co-sponsored by the Water Balance Model Partnership and the Green Infrastructure Partnership, with a goal of moving beyond pilot projects to a watershed-based approach to achieving performance targets for rainwater management and green infrastructure.

“The audience comprised a mix of Surrey staff from different departments, developers and designers who do work in Surrey, representatives from a large number of Metro Vancouver

municipalities, and provincial regulators. At the end of the day, this learning event had achieved our stated objective of starting a dialogue between policy-makers and project implementers,” reports Kim Stephens, Forum team leader and now Executive Director for the Partnership for Water Sustainability in British Columbia

The Forum was a Success

“The Forum was a success,” adds Remi Dubé, formerly Drainage Planning Manager and now Manager of Development Services with the City of Surrey, and the individual responsible for developing the morning program.

We have been getting some pretty good feedback from many of the people who attended the workshop (specifically developers and consultants).  It’s leading into more direct communication with certain developers who are looking at different approaches … they seemed encouraged with the dialogue that the forum appeared to promote.”

Leading up to the Forum, a series of preview stories were published on Water Bucket. They progressively described the elements of the Forum program in order to establish participant expectations. Briefly:

To download a consolidated copy of the entire set of six documents in the series, click on The Story of the 2009 Water Balance Model Forum (Hosted by the City of Surrey)