FLASHBACK TO 2005: “Implementing change is primarily a people matter, not a technical one,” wrote Erik Karlsen in a paper that introduced the What / So What / Now What / Then What mind-map as a foundation piece for convening for action

Released in 2004, the Water Sustainability Action Plan for British Columbia (i.e. “the Action Plan”) recognizes that the greatest impact on water, land and water resources occurs through our individual values, choices and behaviour. The Action Plan provides an umbrella for building partnerships and championing precedents and processes that can inform the Provincial policy, program and regulatory framework.

An Action Plan element is the Convening for Action in BC initiative, launched in February 2005 in Kelowna at a conference organized by the Canadian Water Resources Association. The following story was published in February 2015 to celebrate the 10th anniversary of this milestone moment.

Launched in February 2005, Convening for Action in BC is a provincial initiative. It supports innovation-on-the-ground. It was launched at the 3-day Okanagan Conference on the Future for Water. Held in Kelowna, the conference was part of the response to the 2003 province-wide drought.  Designed to be a transformational event, the Kelowna Conference was a catalyst for changes in the way water is managed in BC.

Now What Do We Do

“The 3-day conference structure lent itself to introducing the convening for action mantra: What – So What – Now What,” recalls Ted van der Gulik, President of the Partnership for Water Sustainability. “The team of Lynn Kriwoken, Oliver Brandes and Kim Stephens provided the Now What part of the program on Day Three. Their ‘now what do we do’ presentations were supported by two companion papers. Read together, those two published papers articulate the philosophy that underpins and guides the Convening for Action initiative.” Ted van der Gulik was a co-author of one of those papers.

Move from Awareness to Action

Sustainable and resilient communities are all about choices – choices that become reality very quickly with lasting consequences. Much depends on getting the choices right,” continues Kim Stephens, Partnership Executive Director. “Erik Karlsen was our éminence grise during early development of the ‘convening for action’ framework. At the time, he was recently retired from the BC Ministry of Municipal Affairs. He brought a wealth of experience to the task. The result is the ‘what – so what – now what – then what’ process for moving from awareness to action.”

Water is the Unifying Element

“Implementing change is primarily a people matter, not a technical one,” states Erik Karlsen formerly Director, Regional Growth Strategies. “Bridging the gap between interest and practice involves motivating practitioners to engage in ways that provide sufficient meaning to inspire them and lead to action.”

“The desired outcome is implementation of on-the-ground changes in policies, programs, applied research, practitioner education and standards of practice that lead to full integration of land development and water management. In a fully ‘integrated landscape’, water is the unifying element,” concludes Erik Karlsen. 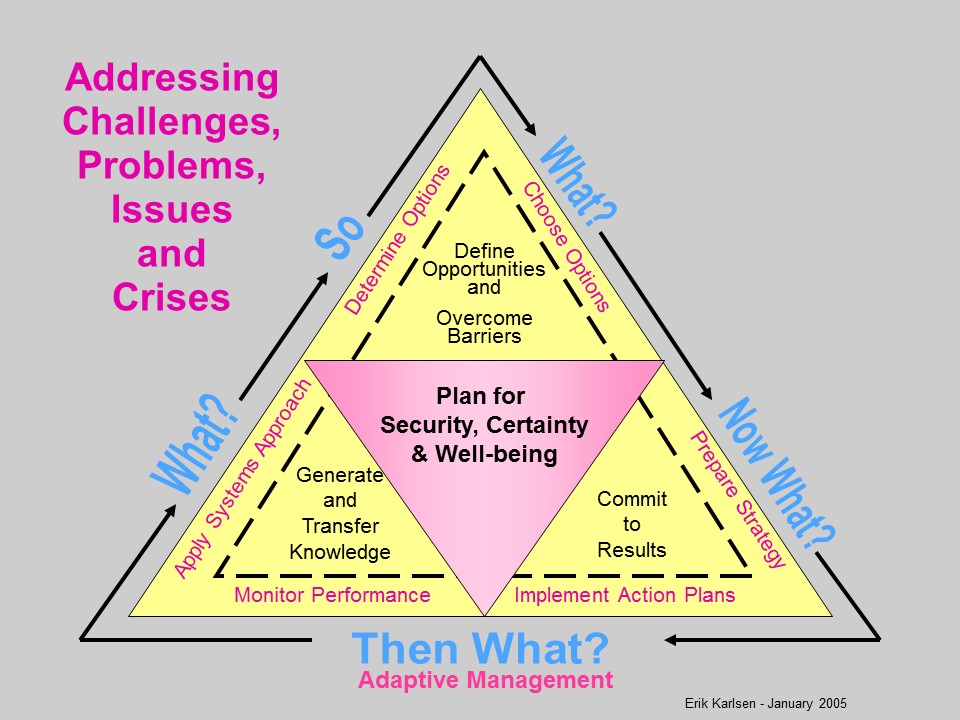 The triangle above summarizes a set of nested processes that address needs for change, and provides a mind map to illustrate how ‘we will get there’. At each corner a commitment must be made to proceed to the next step. These are turning points.

To  read a set of stories posted on the waterbucket.ca website, click on  2005 Towards Sustainable Water Management in the Okanagan

To download the paper by Kim Stephens, Erik Karlsen, Ted van der Gulik and Ron Smith, click on Water Balance Management in the Okanagan: Now What Do We Do? This paper describes the Convening for Action triangle presented below.