“Shifting Currents” was the theme for the 2016 annual conference of the British Columbia Society of Landscape Architects (BCSLA). The spotlight was on the influence water has in all aspects of our lives and landscapes. The keynote address was a co-presentation by Kim Stephens and Ted van der Gulik of the Partnership for Water Sustainability in BC. Kim is the Executive Director and Ted is the President.

“The goal of the 2016 BCSLA Conference was to examine the influence water has in all aspects of our lives and landscapes and the potential consequences climate change will have in our relationship with, reaction to, and management of water in our landscapes,” reports Tara Culham, BCSLA Executive Director.

“Growing demands for water and the ramifications of climate change are having great influence on our relationships with, access to, and use of water in our lives and landscapes. Water use restrictions in 2015 in many BC urban areas are but one example of the shifting circumstances that landscape architects and other professionals need to consider in the planning, development, and maintenance of projects, infrastructure, and landscapes.”

“In part one, we introduced the Water Sustainability Act. We collaborated with Ted White of the Ministry of Environment to create an appropriate storyline for the BCSLA audience.”

“In part two, I connected the dots between the environmental flow provisions of the Act and the Water Balance Express. This set the scene for the first public showing of a 7-minute tutorial video. In the video, Julie Wilson of UBC leads users through a step-by-step explanation of how to use this online tool.”

“The Water Balance Express tool allows people to think about water in a different way, by conceptualizing how it behaves as it moves on and around their property.”

They can see how the built environment (roofs, driveway) and natural features (soil type, depth, vegetation) change the movement or storage of that water.”

In part three, Ted van der Gulik explained the newly enacted requirements for licensing of groundwater use in British Columbia.

“Groundwater licensing came into force on February 29, 2016. This means that 20,000 existing non-domestic wells must now apply for a licence.  Most are in the agriculture sector,” stated Ted van der Gulik in his presentation.

The Partnership for Water Sustainability in BC is assisting the Province with implementation and developed the BC Agriculture Water Calculator.”

“The calculator works for any and all properties in the province. Just go to the website, type an address, and zoom in on that property.  It is that easy. The tool then instantly generates both the annual water demand and the peak irrigation flow rate for the property selected.”

Download a PDF copy of How the Water Sustainability Act is Already Influencing Water Management in British Columbia to view the storyline for the keynote co-presentation by Kim Stephens and Ted van der Gulik.

Ted van der Gulik and Kim Stephens have been a “water duo” since 1988. Both are engineers. Kim provides the urban perspective and Ted the agricultural. Their collaboration started with the  Okanagan Demand-Side Water Management Strategy, released in 1990.

Triggered by the 1987 drought, this landmark study was the genesis for water initiatives subsequently championed by Ted over the course of his career in government. In particular, the Okanagan strategy eventually led to development of the Agriculture Water Demand Model which is currently in the final stages of being implemented province-wide.

Notably, Ted and Kim were members of the Ministry of Environment Working Group that developed A Water Conservation Strategy for British Columbia, released in 1998. 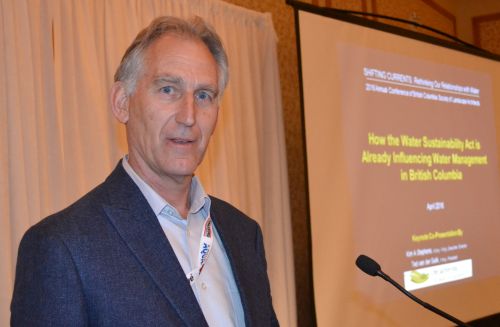 Ted retired from government in 2014 as Senior Engineer in the Ministry of Agriculture. During his 35-year career, Ted received three Premier’s Awards for Innovation and Excellence. Upon retirement, he was honoured with a Premier’s Legacy Award for lifetime achievement; and he was inducted by the Premier into the British Columbia Public Service Hall of Excellence.

Ted has an international reputation for his leading-edge work in agricultural water resource management. The many guides and manuals he has written are used locally and around the world.

Ted is a founding Director of the Partnership for Water Sustainability. He has been Partnership President since 2014. 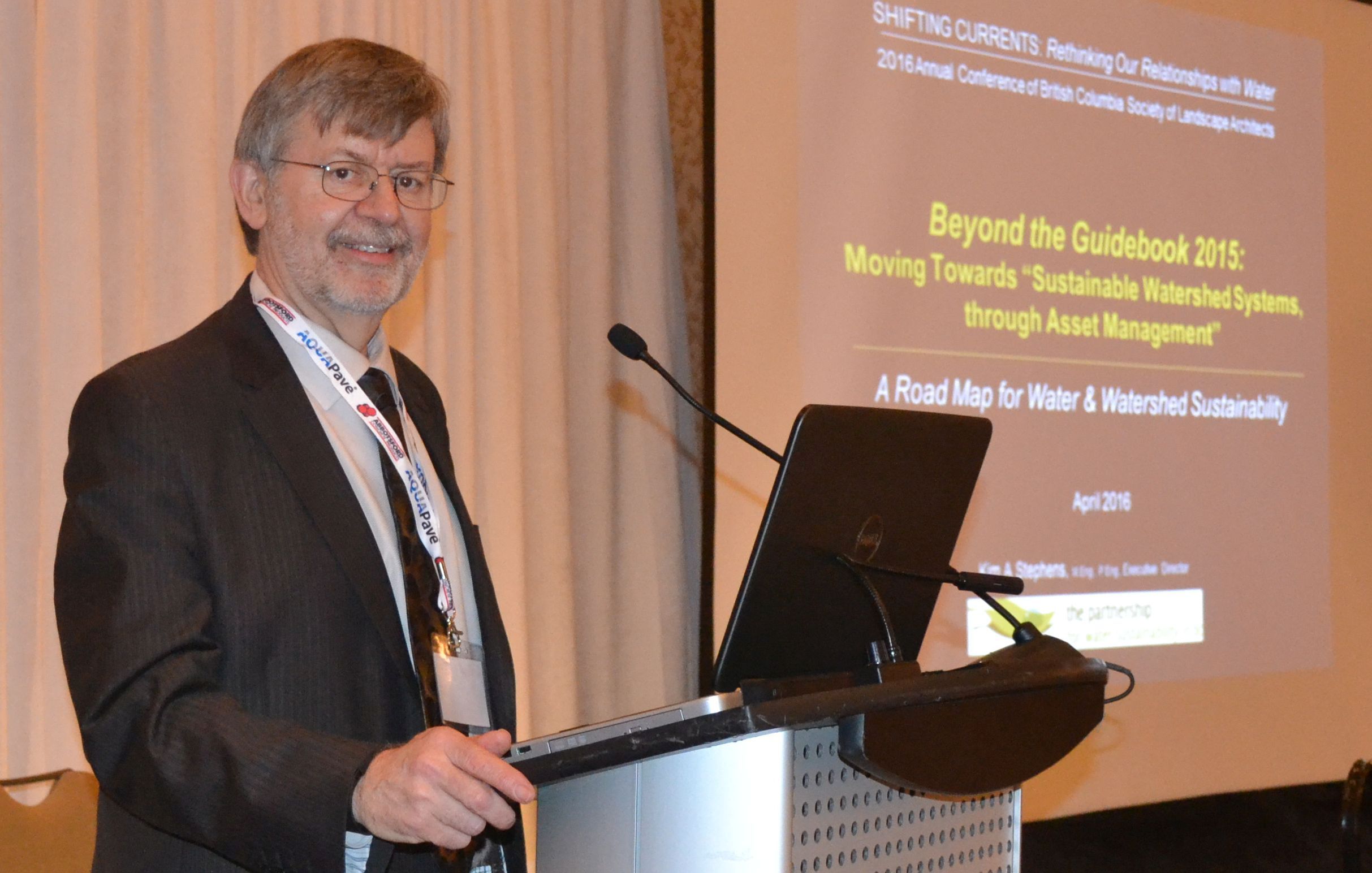 Prior to embarking on his current provincial role in 2003, Kim Stephens was a vice-president and project manager with CH2M Hill, one of North America’s largest environmental engineering organizations.

In 2003, Kim made a career change when he was asked by the provincial government to develop the Water Sustainability Action Plan for British Columbia, released in 2004. Ever since, Kim has been responsible for Action Plan program delivery and evolution.

Kim has received wide recognition for his pioneering efforts. This includes a Premier’s Award for Excellence and Innovation (2009). Also, he has been invited to speak on ‘the BC experience’ and make keynote presentations at forums throughout North America, as well as in Australia (2001, 2016).