FLOWnGROW WORKSHOP: “The challenge of climate change now demands a level of collaboration and commitment heretofore unseen,” states Eric Bonham in his reflections on the most important take-aways

Reflections on Spirit and Science –
An Inclusive Journey

“We deliberated long and hard at the planning stages of the program on how to include the ‘Spirit & Science – An Inclusive Journey’ component. Without question the decision to proceed was the correct one,” stated Eric Bonham when he reflected on what was accomplished at the FLOWnGROW workshop.

“Bob McDonald’s opening keynote presentation ‘Water from a Global Perspective and Beyond’ reminded us all, in no uncertain terms, that we all live on one fragile planet that demands our collective respect,”  continued Eric Bonham.

“It becomes obvious then that  the challenge of climate change now demands a level of collaboration and commitment heretofore unseen. The big question is: are we collectively up for it?”

“When Bob shared the first photograph of earth taken in 1972, showing that little ball we call home hurtling around in space, it put in perspective once again how idiotic and insane our endless squabbling on earth truly is.”

“I say that with purpose, because it needs something outside of ourselves to get the message, and Bob provided that with his talk, further reminding us how important it was to be guardians of that limited and precious resource… fresh water, the subject of the workshop.”

“Bob Sandford reminded us of the cause and effect of changing climate conditions that is, in his opinion, taking on the semblance of a ‘run-away train’.”

“That said, he complimented the gathering for its commitment to progressive initiatives and urged us  to work with like minds on the principle ‘that twa heids are better than yin’ (Scottish expression for ‘two heads are better than one’ which is actually what Bob said !)”

“Chief Aaron Sam gave a talk from the heart on the challenge, in his capacity as the Chief of the Lower Nicola Indian Band, of balancing resource extraction and water security with the reality of job security, that is essential to alleviate poverty.”

“He gave as an example, the Kinder Morgan project, which has now been approved, resulting in a ‘house divided’ within the band itself. Some wish the opportunity of jobs, while others fear the impact on the environment.”

Blue Ecology – An Idea Whose Time Has Come

“The essence of Michael’s vision is ‘embrace a water first approach..water is a living entity – the sacred centre from which all other activities radiate..western science and blue ecology are truly partners..it is time the marriage was made official’.”

“I believe that this was one of the most important take-away messages of the workshop. Indeed we have been saying something similar, but it is far more powerful and meaningful when it comes from Michael with his First Nations background.”

Is Irrigation the Elephant in the Room?

“The presentation given by Denis Neilson on changing agricultural demographics in the Okanagan was excellent and very thorough,” noted Eric Bonham.

“Ken Salvail gave a most interesting talk on landscaping with a message that in essence said ‘the plant has a natural water gauge within itself and simply routinely watering plants is but wasting water’.”

“Steve Conrad led us through an academic research paper on water conservation practices and attitudes in the Okanagan. Once again, a very thorough presentation which laid bare the desire for luscious green lawns in the desert belt. “

“An interesting comparison was made between the Okanagan and the Coast and Vancouver Island where most folk are quite content to have a brown lawn in the summer.” 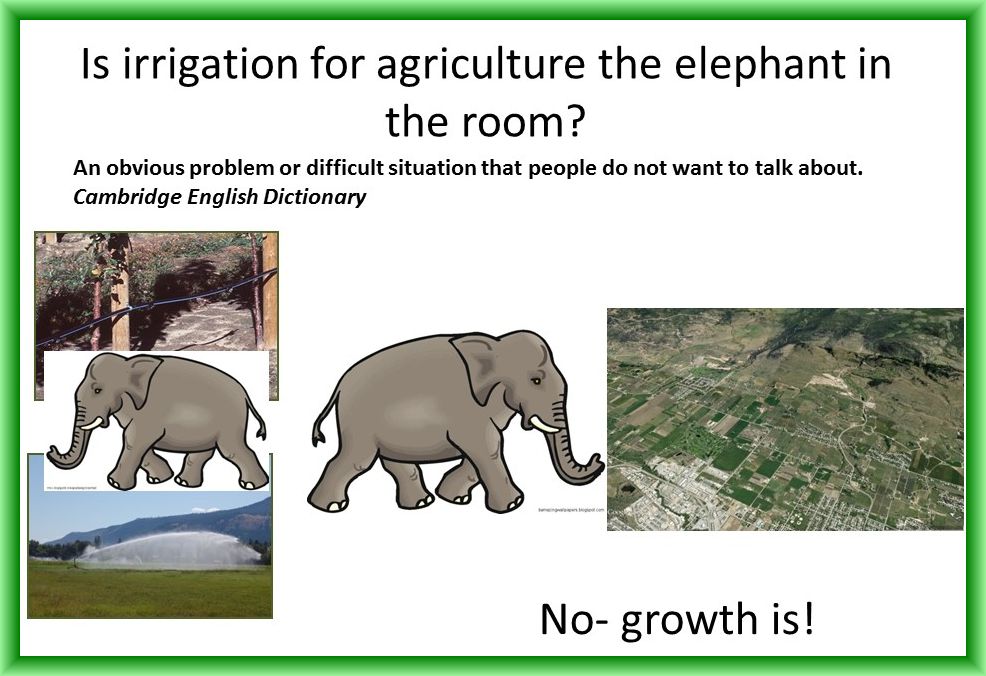 Ecological Accounting Protocol – Another Idea Whose Time Has Come

“Tim Pringle’s presentation on ecological accounting was well received based as it is on the assumption that water ecology is the driving force of all living systems.”

Moving Towards a Sustainable Water Future

“John Wagner from UBC Okanagan gave a fascinating overview on development in the Okanagan noting its Eurocentric  influence and expressed concern with the ‘perpetual growth syndrome’ which currently prevails, that in turn opens up a whole host of questions around future water sustainability in the Okanagan Valley.”

“The final speaker was John Janmaat from UBC Okanagan who spoke to the topic of value…how do you put a value on water and from whose perspective? He also explored the difficult question of justice, water and equality.”

“The Town Hall followed with summary statements from Bob McDonald, Bob Sandford and Michael Blackstock; and then comments from the floor.”

John Janmaat – recognize what we value!

Eric Bonham provided a closing perspective and reflected on these three “bold ideas”:

“I believe it is fair to say these three bold ideas were explored throughout the workshop,” concludes Eric Bonham. “I closed the workshop with the quotation (below) from Stephen Hawking, theoretical physicist, cosmologist and author.”

Watch the 3-minute video of Eric Bonham. It is posted on YouTube: