FLOWnGROW WORKSHOP: “How did we end up with a water ethic that is so completely disengaged from the place in which we live?” – question posed by John Wagner, cultural anthropologist (UBC-Okanagan University)

Moving Towards a Sustainable Water Future in the Okanagan

In Module D, Moving Towards a Sustainable Water Future, the duo of John Wagner and John Janmaat of UBC-Okanagan University spoke to the “sense of place” theme which was introduced in Module A. The focus of their presentations was on HOW to facilitate a stronger connection between Okanagan residents and their landscape.

“Ensuring the long term sustainability of the water resource in the Okanagan requires that we fundamentally transform the ‘settler culture values’ that have dominated the region for the past century and a half, in favor of a made-in-the-Okanagan water ethic and landscape aesthetic.”

“This transformation could occur as the result of a convergence of grassroots movements and decisive political leadership.”

“John Wagner gave a fascinating overview on development in the Okanagan noting its Eurocentric  influence,” commented Eric Bonham when he reflected on what was accomplished at the FLOWnGROW workshop.

“An expressed concern was the ‘perpetual growth syndrome’ which currently prevails. That, in turn, opens up a whole host of questions around future water sustainability in the Okanagan Valley.”

The Okanagan is a Desert

“Okanagan residents tend to have this idea that it is normal and okay to use more water here, given our limited rainfall, since we can’t grow much of anything without irrigation,” wrote John Wagner when he provided his reflections on a defining takeaway message for posterity.

“But this argument rests on the idea that we should live in the Okanagan just like we do everywhere else in Canada, without respecting or appreciating local conditions.”

“How did we end up with a water ethic that is so completely disengaged from the place in which we live?”

John Wagner provided this synopsis for Ethics, Aesthetics and Leadership:

“I began by talking about the landscape aesthetic that is so dominant in the Okanagan, what I refer to as the oasis effect.

“Ibriefly touched on the irrigation history of the Okanagan, the growth of the orchard industry, then fast forwarded to the present to focus more on urban landscaping, which augments the green oasis created by irrigated orchards and vineyards.”

“The main aesthetic that has informed our backyard gardens and city parks is imported from places where irrigation is not needed to maintain a green landscape throughout the year. It is imposed on the Okanagan at great cost to the environment.”

“With this context in mind, I then proposed that we develop a ‘made in the Okanagan’ aesthetic.That would have two very significant interconnected benefits.”

“First, it would facilitate a better understanding and greater appreciation by non-Indigenous Okanagan residents of the Indigenous Syilx landscape and water aesthetic and help us develop better working relations as we go forward.”

“Second, it would support a movement towards using less water in our backyards, towards alternative, less irrigation-dependent landscaping choices.”

“Water use consumption per capita in the Okanagan is still about twice the national average (about 650 litres per day vs 350 litres per day), and that is mainly due to backyard irrigation, not agriculture.”

“I brought forward some facts and figures on this point that I believe are very compelling.” 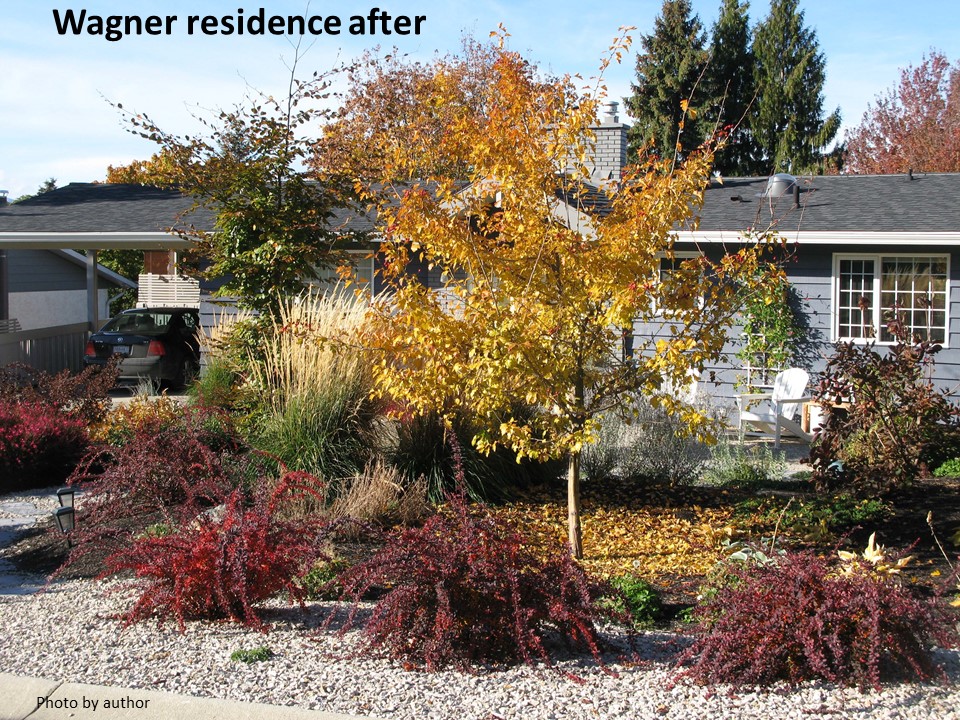 “I then addressed the question of how do we get there? By that, I mean to a more conservation-minded water relationship and a landscape aesthetic that is more appreciative of what is ’natural’ here rather than what makes us look like England or Vancouver.”

“This is where I briefly mentioned the proliferation of grassroots initiatives in the valley, the xeriscaping initiatives, the environmental NGOs focusing on wetland and stream restoration projects, the researchers working on habitat connectivity, etc.’

“I closed by proposing a very specific way that municipalities could show leadership.”

“Many have adopted water smart programs to reduce water use, but no one has been very ambitious in their targets, and water use reductions appear to be stuck in about the 10% to 15% range.”

“I proposed that we adopt policies to reduce our water use consumption per capita to the Canadian national average. This would require that we cut our consumption in half, which seems radical, and politicians have not been willing to go there.”

“But really, given that we live in the lowest precipitation per capita area in Canada, should we not be able to at least get our use down to the national average?”

“And that is still double what they use in many of the most affluent countries in Europe. I mentioned a few of the things that could help motivate individual households to take on the 300 liters/person/day challenge and allow them to succeed.”

“I wrapped up by mentioning one final point of intersection that will lead into an issue John Janmaat addressed in more depth: the need for us to all work together in the valley to realize a more sustainable relationship with water.”

“We are not proposing a top down approach. Rather we want to emphasize the need for an approach that is inclusive and that takes a range of cultural values into consideration, social justice, democracy, citizen engagement, as well as ecosystem services,” concluded John Wagner.

Download Ethics, Aesthetics and Leadership to view a PDF copy of the PowerPoint presentation delivered by John Wagner.