VIDEO: “Collaboration is essential and must cross all political and community boundaries, for climate change is no respecter of such creations,” stated Eric Bonham

The weather in 2015 has impacted on how the public views the BC climate and their understanding of how it is changing. There is now growing awareness that the summer dry season has extended on both ends. Also, that BC communities can no longer count on a predictable snowpack and reliable rain to maintain a healthy water balance in their watersheds.

2015 is a teachable year. This creates a window of opportunity to implement solutions and tools developed in BC.

In December 2015, the Feast AND Famine Workshop addressed this over-arching question: What should we expect and what can we do to build “water-resilient communities”?

“The sub-title for this Feast AND Famine Workshop could very well be LEADERSHIP, PROCESS, CREATIVITY and the ROLE OF CHANGE AGENTS…for this is what we heard today. People, in each of their areas of expertise, are making change on the ground,” stated Eric Bonham when he provided a rousing finish to the day with his reflections on what he had heard and observed. 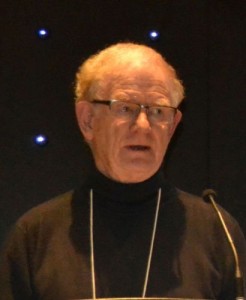 Eric Bonham is a civil engineer with a political science degree and 50-plus years of water-centric experience. He is a former Director in two provincial ministries – Environment and Municipal Affairs.

A keen believer in community stewardship, he is a Director of the BC Lake Stewardship Society and was actively involved in park creation on Vancouver Island. He was named an Honorary Citizen of Victoria for his contribution to the community and has received awards from a number of organizations for his contribution to water management issues in BC.

“So what were the fundamental lessons garnered from the Feast and Famine workshop and how can we apply those lessons to the future planning of our urban and agriculture  communities?”

“Bob Sandford set the context with his key observation that the hydro-climatic stability, once fairly dependent, is no longer the case and as a result, innovative strategies that address the challenge of drought or flood are now required. This reality has an immediate impact on future water, energy and food security.”

“Furthermore, the timing of the workshop was fortuitous in that was held immediately before the COP21 International Climate Change Conference in Paris, for it was clear from the content of the presentations at the Feast and Famine workshop that anticipated climate change has to be a core consideration in the future planning of our communities and agriculture practices in British Columbia and beyond.”

Towards Consensus, Commitment and Collaboration

“Given this context, Eric Bonham noted, “future planners, engineers, politicians and citizens alike will be called upon to demonstrate both vision and pragmatism and be able to frame the issue of achieving water-resiliency in communities against the backdrop of an unpredictable water cycle. This in turn demands the honing of a further skill, that of working together towards consensus, commitment and collaboration.”

“Such collaboration is essential and must cross all political and community boundaries, for climate change is no respecter of such creations. This will not come easy and will call for cooperation on a level heretofore not considered necessary or even possible, which brings to mind that old adage ‘united we stand, divided we fall’.” 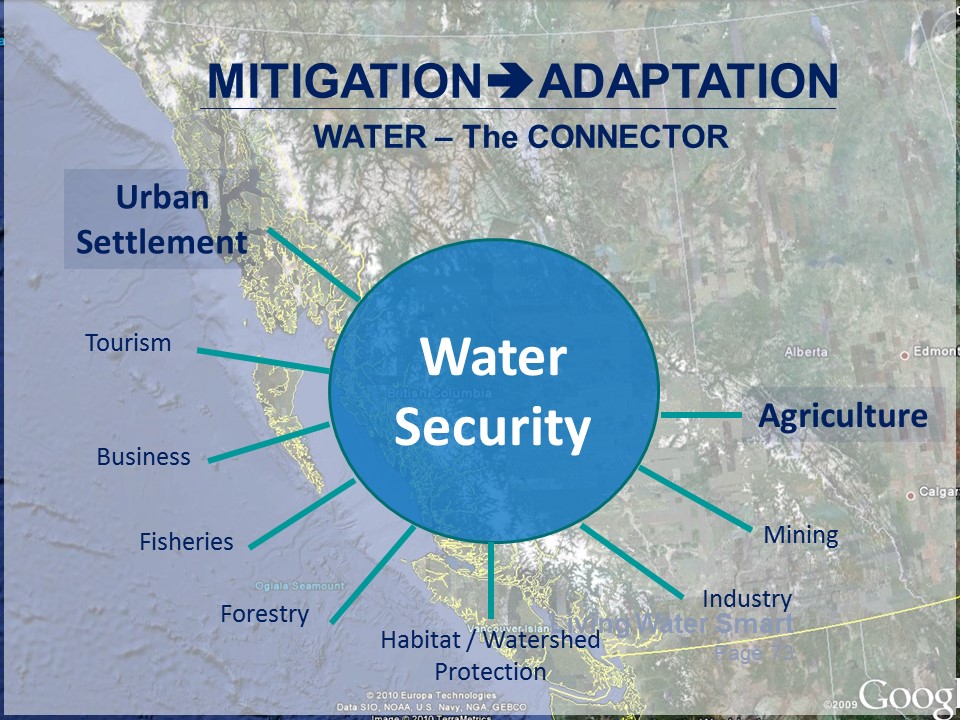 Water is Truly the Connector

“A further observation from the workshop worthy of note is the core observation that we have to ensure water security if we wish a stable society.”

“While this may be considered a statement of the obvious, our presenters rightfully reminded us that water security will be a casualty of global warming and as such, calls for astute stewardship of the resource both now and in the future. For water is truly the connector of all activities on earth, whether it is the economy, ecology or the well-being of human and non-human alike.”

“It may well be argued that water should be the entrance point for the discussion on climate change for the connection is readily understood on this complex issue when we experience an ever increasing occurrence of flood or drought.”

“A common thread identified throughout the workshop was the recognition of the important role played by nature through the provision of natural capital and natural assets. Traditionally asset management has been considered only in terms of pipes, pumps and concrete infrastructure, whereas the services provided by nature add significant benefits, benefits however that have been difficult to determine in economic terms.”

“With the advancement of the concept of ecological accounting that will identify the financial value of goods and services drawn from natural systems, asset management will become a more exacting science which will speak to the need for maintaining the integrity of natural systems within the urban context. The hydraulic practitioners of the future will be encouraged to ‘think like a watershed’ recognizing the invaluable contribution of natural systems.”

“The identification of several tools throughout the workshop, including the Water Balance Model, the Agriculture Water Demand Model, the Agriculture Irrigation Licencing Calculator, the Building Adaptive & Resilient Communities Program and the new Provincial Water Sustainability Act, underscored the advance of hydraulic knowledge and tools that address the challenge of climate change.”

“Kim Stephens noted that ‘these important advances come with a commitment, determination and an understanding that accepting risk opens the door to innovation’.”

“In summary what was indicative throughout the workshop was the identification of the call to think creatively as well as collaboratively and search for ‘out of the box’ solutions to the pending changes anticipated from climate change. Albert Einstein had his finger on the pulse when he noted:

“No problem can be solved from the same consciousness that created it. We have to learn to see the world anew.”