Feast AND Famine Workshop: “If a vision for food security is to be entrenched as the new business as usual by 2030…….we have a 5-year window to get the initial elements of restorative development right,” forecasts Bob Sandford

Western North America may be crossing an invisible threshold into a different hydro-meteorological regime. In BC, the summer dry season has extended on both ends and communities can no longer count on a predictable snowpack and reliable rain to maintain a healthy water balance in their watersheds. Annual volumes of water entering and exiting regions are not necessarily changing; instead, what is changing is how and when water arrives – it is flood and drought! On December 1, the Feast AND Famine Workshop will address this over-arching question: What should we expect and what can we do to build water resilient communities?

The Feast AND Famine Workshop is structured in four parts. In Module A, Kim Stephens and Bob Sandford will tag-team to provide the BC and global contexts, respectively. They will interact with the audience in a town-hall style ‘sharing & learning’ session that will set the tone for the workshop day.

Bob Sandford will elaborate on the value of studying and understanding the history of water policy and management in California. He will also make the case for early action on ‘restorative development’. Kim Stephens will introduce three provincial ‘game-changers’ that enable restorative development in BC. Participants will learn that accepting risk opens the door to creativity and results in innovation. 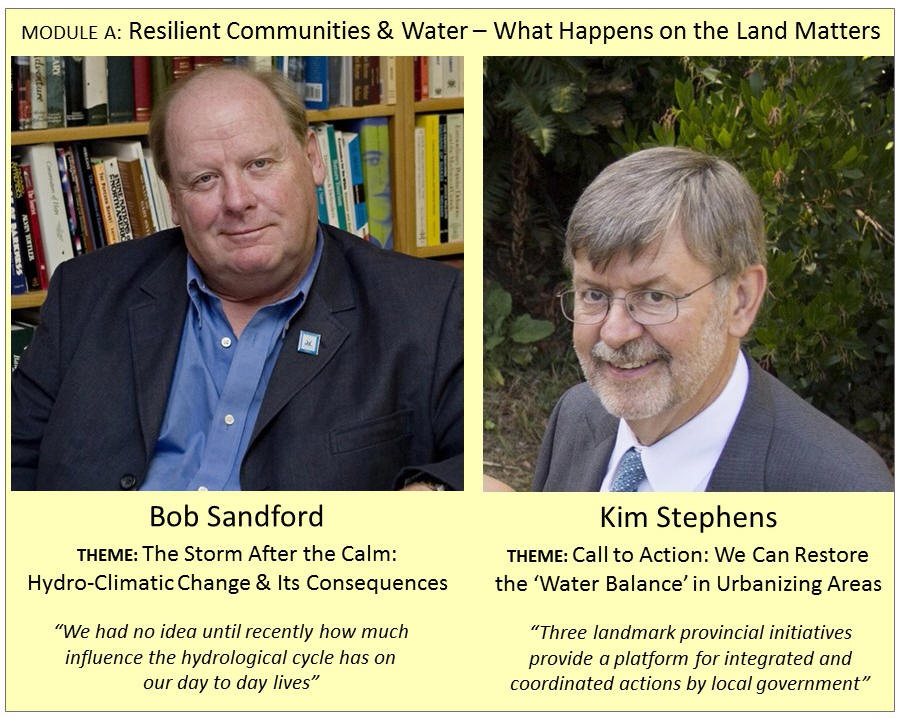 “We now realize that our current risk assessments with respect to climate disruption are built on confidence in relative hydrologic stability that no longer exists. This changes everything,” states Bob Sandford. An internationally respected ‘water champion’ and widely published author, he is EPCOR Chair for Water and Climate Security at the United Nations University Institute for Water, Environment and Health. His background is in the physical sciences and his interest is our relationship with the landscape.

“We had no idea until recently of how much influence the hydrological cycle has on our day to day lives or on the broader conditions that define the distribution and diversity of life on this planet. It has been very difficult even for experts to grasp the full extent of what the loss of relative hydrological stability means.”

“Unfortunately the problems associated with the loss of relative hydrologic stability are not going away. Quite the opposite.  More and more evidence points to the fact that troubling changes in global hydro-climatic circumstances are accelerating.

“Because it has lacked clear definition and timeframes, the concept of sustainable development has become like elevator music to which we all march down the road together, thinking we are actually doing something that is not being mocked and overshadowed by uncontrolled population and economic growth. It all sounds terrific until someone starts asking questions about where we are going.”

“Deteriorating Earth system function makes it very clear that, if we don’t take sustainability seriously, we could find ourselves on a planet whose conditions are hostile to human habitability as least as we know it today.  To achieve the UN’s 2030 sustainable development agenda we need another agricultural revolution – a revolution in restorative agriculture as a means of achieving water, food and climate security. All of society must support that revolution,” concludes Bob Sandford.