“Convening for Action” experience in British Columbia shows that on-the-ground success will follow when local governments collaborate with community champions, embrace a shared vision, and strive to change a community’s land ethic for the better.

Faye Smith, Project Coordinator with the Mid Vancouver Island Habitat Enhancement Society (MVIHES), is a champion for stream stewardship and watershed health. She is a catalyst for science-based action along the east coast of Vancouver Island. This story celebrates Faye Smith’s track record of leadership and inspiration, and was prompted by an editorial published in the Parksville Qualicum Beach News in February 2015.

Through Smith’s leadership and focus on the health of salmon habitat is to recognize and respect the history of our region. Smith’s style and grace is another asset for MVIHES. Does she believe development is doing damage to the waterways so important to the coho and sockeye? Yes. Does she show up with signs, yelling and screaming, at every meeting where a subdivision is discussed? No.”

“Smith, like other smart people who are truly working to improve our environment, relies on experts and science. And history. And she reports the good as well as the bad. Surely, with the help of people like Smith and organizations like MVIHES, we are smart enough as a society to allow development AND protect fish habitat,” concluded John Harding in his editorial. 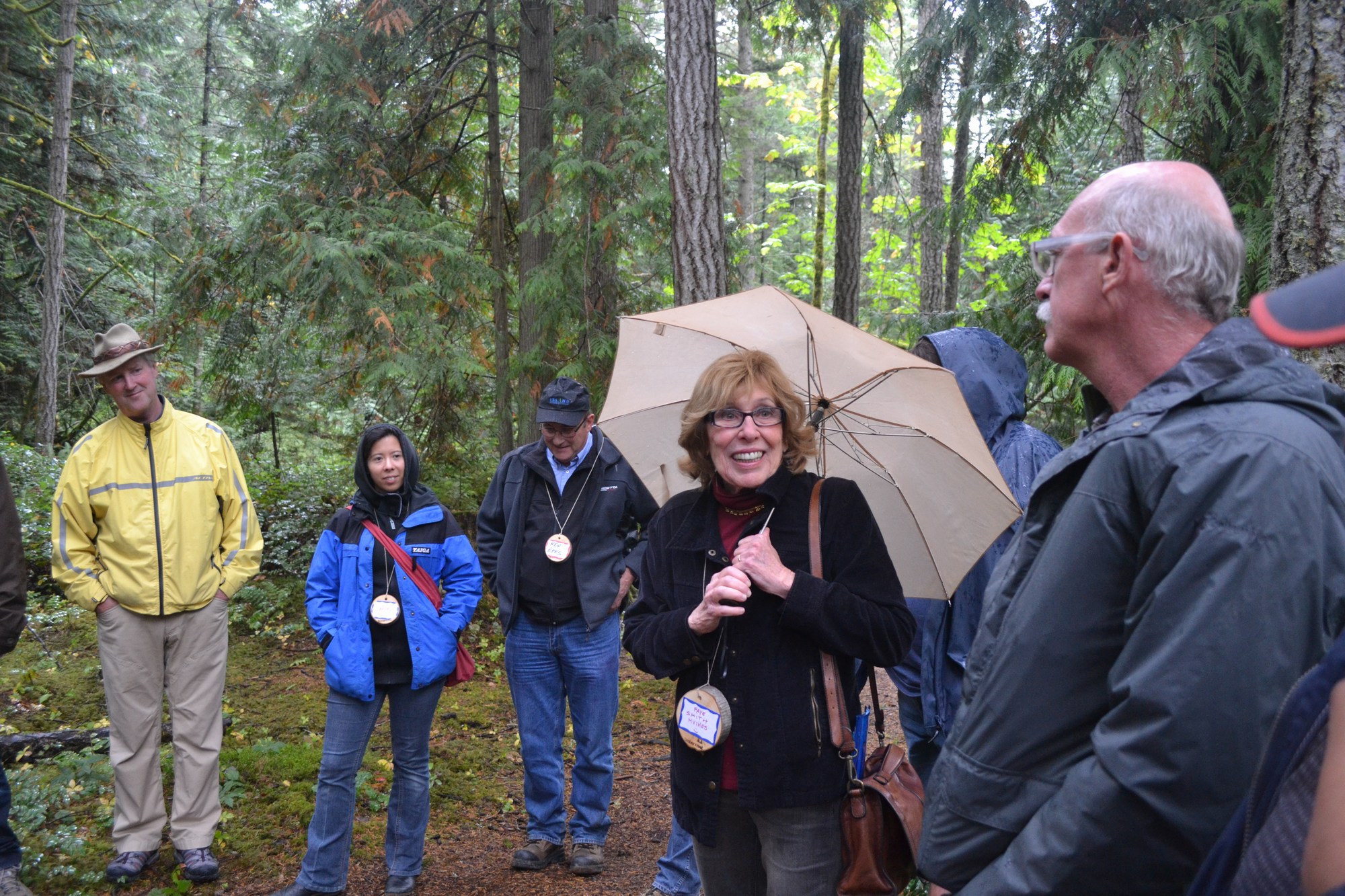 Faye Smith obtained grant funding from RBC Blue Water and Real Estate Foundation that enabled Dr. Gilles Wendling to look at groundwater differently in the Englishman River. His research has advanced science-based understanding and has informed evolution of the Water Balance Methodology for Protecting Watershed Health.

“The approach that we took in the Englishman River Watershed was to involve the community,” states Gilles Wendling. “The long-term health of watersheds depends upon the stewardship of the people who live in the watershed. By getting them involved, the community connects to its watershed, its complexity and how it works.”

“Community members will then be able to more willingly modify their behaviour and management of the land, after they appreciate the direct connection between what happens at surface and what happens in the subsurface, on their property, the property of their neighbours and their local environment.”

“The advancement in knowledge of the Englishman River Watershed is greatly due to Faye’s continuous hard work, whether in organizing volunteers for sampling water, filling applications for funding, organizing public meetings, attending public forums … and asking hard questions.  And always with a smile and a lot of class.”

“Working with Faye has always been a pleasure. Her heart, engagement and dedication in protecting the streams, the watersheds, the fish, set such an example for us, whether we are a professional, an elected official, or a school kid!,” concludes Gilles Wendling.

Work Hard and Make a Difference

“When asked why she is so passionate about fish and streams, Faye says it comes from a deep commitment to doing the things you love, and doing it well. As an accomplished music teacher and performer, Faye has had to be enthusiastic and committed, to be an inspiration to her students and others,” reports Peter Law, a founding Director of the Partnership for Water Sustainability in BC. Peter is also a member of the MVIHES Board of Directors.

“Being passionate about fish and streams (which I am) and being passionate about music (which I am) are pretty much the same. You have to learn, practise and keep being involved with both. They take commitment and you need the time to stay engaged and keep learning more,” said Faye. “The rewards come from hard work and the feeling you are making a difference, no matter how small.”

“Faye Smith is a terrific example of a dedicated stream-keeper, whose many hours of volunteer time, working on our small urban streams, lakes and wetlands is having an important influence on local government’s policy concerning watercourses” concludes Peter Law.

Gilles Wendling contributed the groundwater component of the Primer on Integrated Rainwater and Groundwater Management for Lands on Vancouver Island and Beyond. To download a copy, CLICK HERE. The Primer supports implementation of Living Water Smart principles in the local government setting to protect the Water Balance.