“Embrace shared responsibility. Create a legacy for those who follow in our footsteps,” says Lynn Kriwoken, Executive Director, BC Ministry of Environment 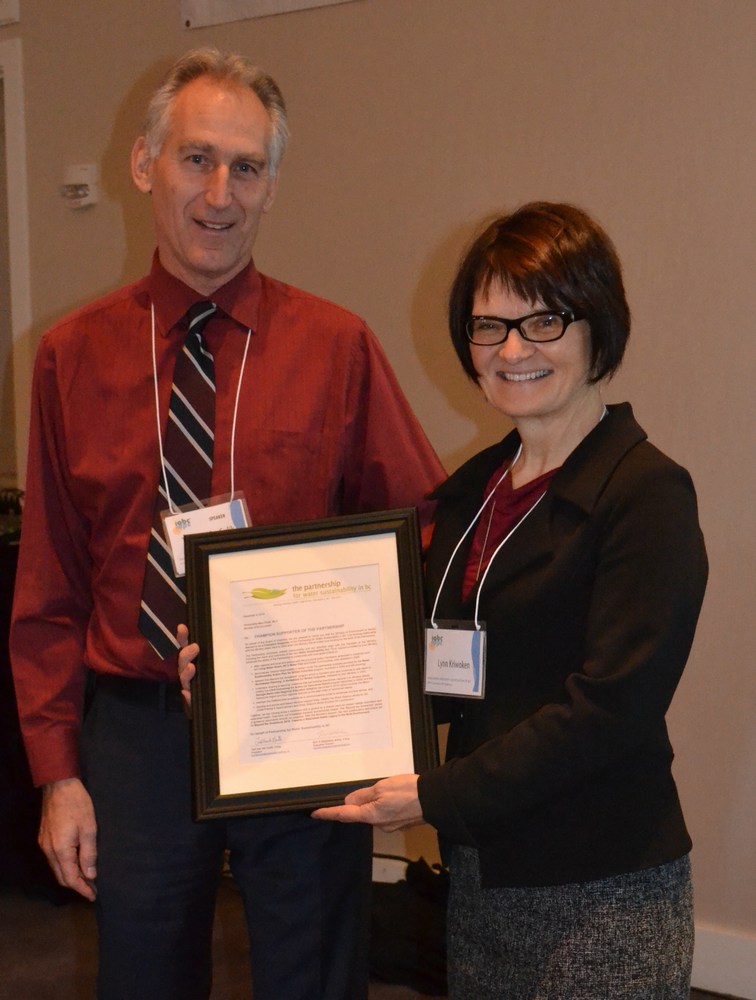 Ted van der Gulik (L), President of the Partnership for Water Sustainability in BC, presented the framed “Champion Supporter recognition” to Lynn Kriwoken (R), Executive Director in the BC Ministry of Environment

The BC Ministry of Environment is the latest organization to be recognized as a Champion Supporter of the Partnership. Presentation of a framed “letter of recognition” took place at the Partnership’s Annual General Meeting, held in Victoria in December 2014. Lynn Kriwoken, Executive Director, accepted the recognition on behalf of the Ministry.

Relationship Dates Back to 2003

“At long last we have the opportunity to recognize the Ministry, and in particular the role that Lynn Kriwoken has played over the years in leading the Living Water Smart initiative on behalf of the Province,” stated Kim Stephens, Partnership Executive Director, in setting the stage for the presentation.

“I recall well the committee meeting in April 2003 when Lynn Kriwoken proposed the idea that resulted in the Water Sustainability Action Plan. The Ministry provided seed funding and the Action Plan was released in February 2004. After that, the Ministry contributed core funding for a number of years. The rest is history.”

“The Partnership embraces shared responsibility and our activities align with the mandate of the Ministry of Environment, including the vision and outcomes of the new Water Sustainability Act. Thus, support provided by the Ministry enhances the ability of the Partnership to collaborate with local governments,” continued Ted van der Gulik, Partnership President and formerly the Senior Engineer with the Ministry of Agriculture.

“We are moving along a continuum that is guided by a shared vison for stream habitat restoration and watershed health. Over time, our knowledge expands and

becomes clearer. The ‘Beyond the Guidebook’ series of primers, watershed case profiles and guidance documents records our collective progress. With the Ministry’s support, the next collaborative deliverable will be Beyond the Guidebook 2015: Towards a Watershed Health Legacy in the Built Environment. This will integrate the case study experience of local governments in five regional districts.”

“I believe that the key to the success of the Ministry’s relationship with the Partnership and its evolution over the years has been our shared vision for water stewardship,” responded Lynn Kriwoken. “Also, I strongly believe that senior governments can’t do it alone. Nor should senior governments do it alone, not when there is such a wealth of knowledge and innovation and ideas at the local level.”

“The partnership umbrella provided by the Water Sustainability Action Plan has allowed the Province to leverage partnerships to greatly enhance the profile and resulting impact of Living Water Smart. The Partnership is playing a key delivery role in several theme areas, in particular developing tools for local government and providing training to support an environmentally adaptive approach to community design.”

“Living Water Smart acknowledges that what government does is only part of the solution. Living Water Smart challenges all British Columbians – individuals, families, communities, business and industry to step up and be water stewards. Embrace shared responsibility. Create a legacy for those who follow in our footsteps.”

To read a story posted elsewhere on the Convening for Action community-of-interest about the presentation, click on Partnership for Water Sustainability recognizes BC Ministry of Environment as a “Champion Supporter”