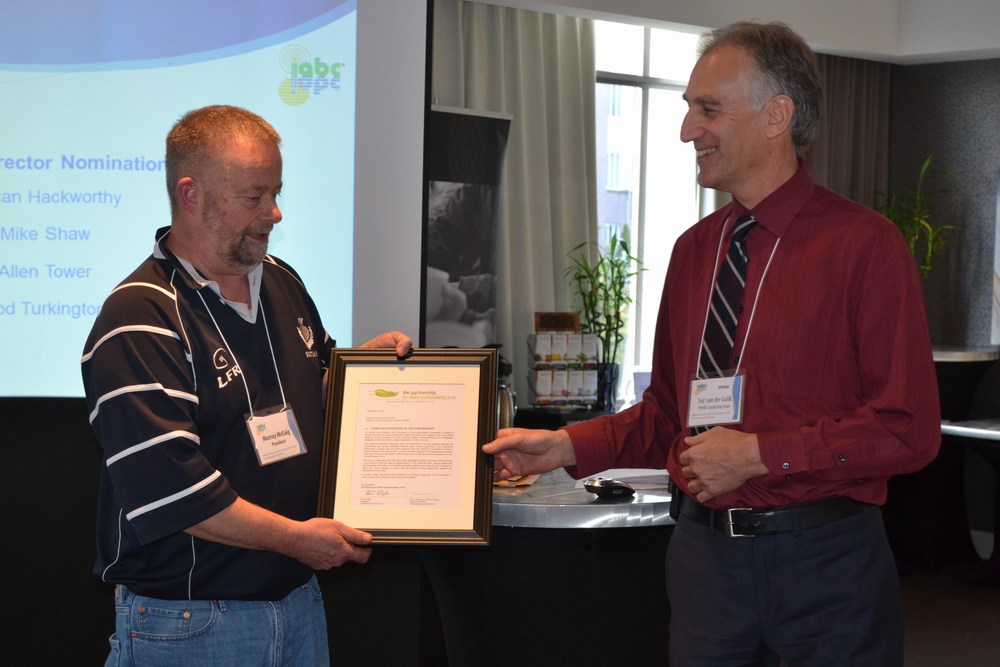 Why the Partnership recognized IIABC as a “Champion Supporter”

“The Partnership is especially appreciative of the financial and in-kind support that we have received from the Irrigation Industry Association over the years. For a number of years, IIABC provided an annual grant to the waterbucket.ca website. IIABC also provided seed funding that helped the Partnership incorporate as a not-for-profit society.”

“More recently, IIABC and the Partnership have co-hosted annual workshops, with IIABC taking on the responsibility for logistics and administration.”

“From the Partnership perspective, the administrative support provided by IIABC for workshop organization is huge. It has made it possible for us to turn our AGM into an event,” continued Ted van der Gulik.

“Our joint workshops have proven to be a great success, both in terms of attendance and content. In the process, we have brought two worlds together through an integrated program.”

“We established the precedent in 2013 with “Get Your Mind Into the Gutter: A Workshop on Rainwater Harvesting in British Columbia”. Building on that precedent, the Managing Water Workshop this year is designed to spark a conversation and ultimately inform a shared vision for Vancouver Island.”

Collaborate to Make a Difference

“The IIABC is collaborating with the Partnership to build a foundation for future change,” states Keesha Rosario, IIABC Past-President. “This collaboration will help us align our industry education and certification offerings that include efficient irrigation systems. This will also assist us in supporting our membership with sustainable irrigation practices. We all need to be accountable for our water resource. With shared tools and programs; we can collaborate to make a difference.”