Over a 2-week period in October-November 2014, the Across Canada Workshop Series on Resilient Rainwater Management: Adapting to a Changing Climate showcased the case study experience of those who are collaborating under the umbrella of the Water Sustainability Action Plan for British Columbia.

The program introduced audiences in Alberta, Ontario, Quebec and the Maritimes to a number of web-based tools, in particular: the Water Balance Model Express for Landowners; and to the District of North Vancouver’s GEOweb open data portal.

The Alberta Low Impact Development Partnership (ALIDP) hosted the first workshop in the Across Canada Workshop Series. The venue was the City of Calgary’s Water Centre.

“Each workshop in the Across Canada Series comprised four modules,” reports Kim Stephens, Executive Director of the Partnership for Water Sustainability in British Columbia. He was the series organizer and team leader.

“Three words capture the essence of Module 2 and 3: CONTEXT-INTENT-RESULTS.”

“Module 2 explained the science behind the Water Balance Methodology and how our knowledge expands and becomes clearer over time. This primed the audience for Module 3.”

“In Module 3, the spotlight was on the demonstration of four web-based tools: WBM Express, Drainage Infrastructure Screening Tool, GEOweb and Irrigation Scheduling Calculator.”

“To kick-off the discussion in Module 4, and because of his leadership role in founding ALIDP, I asked the City of Calgary’s Bert van Duin to share his light-bulb moments, and in particular his big take-away.”

To Learn More About the Workshop Curriculum: 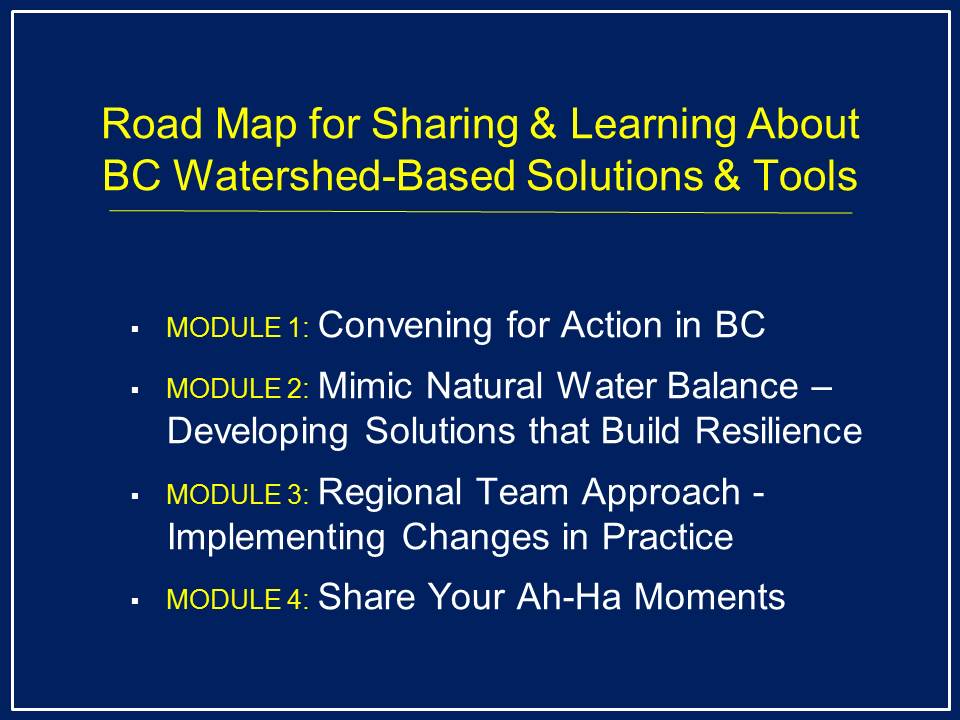 “The big takeaway for me is confirmation that in Calgary we are actually on the right track; and it fits with a number of items that I heard,” stated Bert van Duin, Drainage Technical Lead with the City of Calgary’s Water Resources group.

“There is a lot of discussion pertaining to degraded areas, wetlands and streams. People say ‘well, it is degraded and so it has no value’. In contrast to that mind-set, the notion of the Shifting Baseline continuum tells us that we can go back to a higher state. That is one part that was really confirmation of what we have been saying.”

“The other part was the interflow discussion. This fits with the discussions that we are having about a new master drainage plan. We are saying that we would like to see rain gardens along the back of lots to sustain the stream. Today I heard confirmation of this direction.”

“In summary, the first workshop in the Across Canada Series was an overwhelming success in Calgary,” concluded Bert van Duin.

To Learn More About the Shifting Baseline:

To download a copy of a “backgrounder / op-ed” released by the Partnership for Water Sustainability in October 2014, click on Creating the Future in British Columbia: Recognize and Address the “Shifting Baseline”.

“As a member of the ALIDP, I was fortunate to attend the workshop and found it extremely informative and inspirational,” stated Yvonne Faas, Senior Stormwater Engineer with exp Services Inc.

“I am the senior stormwater engineer on staff at a land development company in Calgary. I felt some of the most valuable take-aways from the workshop for me personally were the reassurance of community

support and motivation. The forward thinking visions were inspiring!”

“As an engineer, the technical tools and charts were certainly of interest to me. The cross-learning between a variety of specialists and ologists has remained thought provoking since the workshop, and has resulted in me reaching out to my network already.”