The purpose of the Project was to quantify the proportion of rainfall intercepted by the tree canopy in an urban forest. The vision is that the Project will inform urban planning by providing a science-based understanding regarding the benefits of maintaining a tree canopy in the urban environment.

Clovelly-Caulfield has a forested setting. Development along natural contours and siting of homes ‘amidst nature’ has been the defining characteristic of the neighbourhood. Participation of Clovelly-Caulfeild residents in the research project was an outcome of a neighbourhood planning process.

According to Paddy Sherman, Chair of the Council-appointed Clovelly-Caulfeild Neighourhood Plan Working Group, “We are impressed by the innovative and easy-to-install system that Dr. Markus Weiler of UBC and

Richard Boase of North Vancouver District have developed for capturing rain that makes it through the tree canopy. The community volunteers are excited to play a part in this project. This on-the-ground research by UBC will inform the neighbourhood planning process by bringing science into the discussion of the role that trees play in the urban environment. It will also advance the state-of-the-practice in rainwater management.”

ime, one property at a time. Therefore, the Working Group recommended implementation of a science-based approach that quantifies the benefits of the tree canopy and landscape-based solutions in preventing the creation of rainwater runoff. “The goal is ‘no net increase’ in runoff volume after redevelopment of individual properties”, notes Paddy Sherman.

The Right Trees in the Right Places

“In theory, it is highly probable that interception losses of a tree that stands in an urban setting is larger compared to a tree within a forest stand. There may be even an optimum of tree density and structure whereby the interception is largest for a certain

tree density,” stated Dr. Markus Weiler in 2005 when the project was initiated. At the time, he was Chair of Forest Hydrology at the University of BC.

“If this density can be determined, or even the relation of tree density to interception loss, local governments could provide urban developers with guidance as to how many trees need to be maintained within a residential lot to maintain a certain interception effect.”

“This observation underscores the importance of maintaining some tree cover on residential lots. Also, it leads one to articulate the counter-intuitive argument that fewer trees is actually better from a rainwater management perspective – provided there is still a reasonable canopy.”

To download and read the complete story, click on University of British Columbia Brings Rainwater Management Science into the Community.

The following documents on the Clovelly-Caulfeild Neighbourhood Planning Process can be downloaded by clicking on the links:

To access the homepage on the Rainwater Management community-of-interest for the research project, click on Tree Canopy Interception. 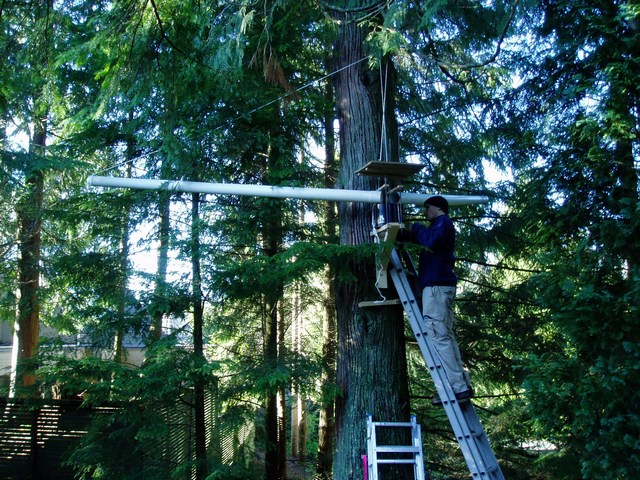 Installation of rainfall interception device in the Clovelly-Caulfeild neighbourhood