Rainwater Management in a Watershed Sustainability Context – What’s the Goal?

In its November-December 2010 issue, Stormwater magazine launched the Green Infrastructure & Community Design Series. Articles in the series have been contributed by members of the Rainwater-in-Context Initiative. Formed in 2010, the initiative works to institute rainwater management practices that strengthen and fully complement “new urbanism” at all scales.

The last article in the series was co-authored by Kim Stephens and Jim Dumont,  Canadian contributors to the Rainwater-inh-Context Initiative. The article is a compendium of the perspectives of those leading change in British Columbia. The article elaborates on how science-based understanding has informed the process for moving from awareness to action in British Columbia.

The following is an extract from the article. To download the complete article, click on Rainwater Management in a Watershed Context – What’s the Goal? 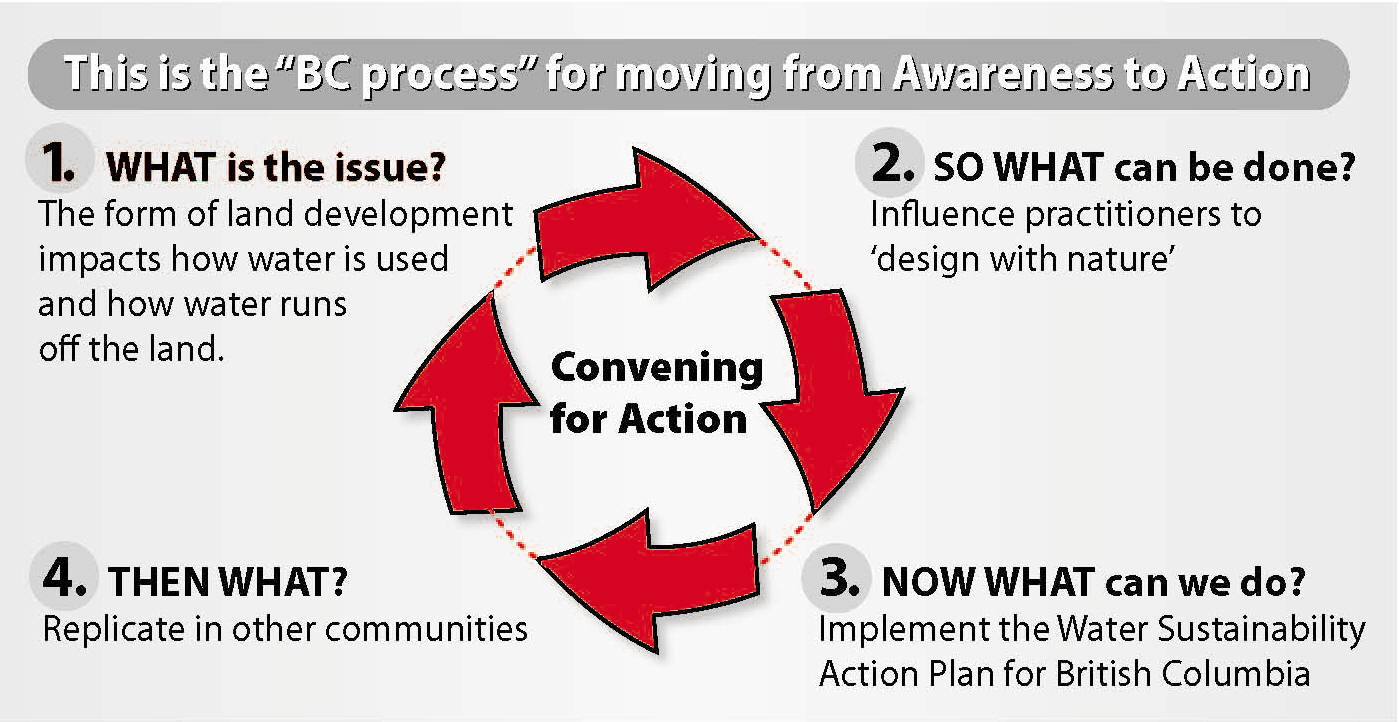 “In both Canada and the United States, there is a growing green infrastructure movement. This reflects a heightened public awareness of the need to build our communities differently. Also, land use and infrastructure professionals increasingly appreciate that effective green infrastructure is at the heart of responsible rainwater management,” states Kim Stephens, Executive Director, Partnership for Water Sustainability in British Columbia.

“The article is written from a British Columbia perspective,” continues Kim Stephens. “The article connects the dots between recent developments in the United States, such as A Strategic Agenda to Protect Waters and Build More Livable Communities Through Green Infrastructure released by the United States Environmental Protection Agency (EPA) in April 2011, and comparable initiatives that have been underway in British Columbia for the past decade.”

“The approach we have taken in British Columbia differs from that of the EPA due to the nature of the root problems being solved,” continues Jim Dumont, Engineering Applications Authority for the Water Balance Model Partnership. ”The critical issue in British Columbia is the damage and loss of habitat caused by development and erosion of the

headwater streams. The focus is in direct response to Canada’s Fisheries Act that prohibits damage of fish habitat.”

What Next in British Columbia?

“A decade ago, we realized that changing the way we develop land depends on establishing higher expectations and challenging land and water professionals to embrace share responsibility. We knew it would

take time to change the culture. We believe that British Columbia is now at a tipping point. Implementation of a new culture for urban watershed protection and restoration is within our grasp,” emphasizes Ted van der Gulik, Senior Engineer in the BC Ministry of Agriculture and Chair of the Water Balance Model Partnership.

“The approach to rainwater management and green infrastructure in British Columbia is rooted in an underlying environmental ethic,”  adds Kim Stephens. “Now, the impact of the new fiscal reality is providing an additional driver for designing with nature:

The initial capital cost of municipal infrastructure is about 20% of the life-cycle cost; the other 80% largely represents a future unfunded liability.”

“Sustainable Service Delivery is the Province of British Columbia’s branding for a life-cycle way of thinking about infrastructure needs and how to pay for them over time. The approach is holistic. We are challenging

local governments to think about what asset management entails BEFORE the asset is built. The paradigm-shift starts with land use planning and determining what services can be provided sustainably, both fiscally and ecologically,” summarizes the Province’s Glen Brown. He is the Executive Director of the Local Government Infrastructure and Finance Division; and the Deputy Inspector of Municipalities.

“The legislative authority for integration of land use planning and asset management, including financial management, already exists. Local governments can develop a truly integrated Asset Management Strategy that views the watershed though an environmental lens.”

“The Province’s Living Water Smart and Green Communities initiatives are catalysts for ‘designing with nature’: Start with effective green infrastructure and protect environmental values. Get the watershed vision right. Then create a blueprint to implement green infrastructure,” concludes Glen Brown.