FLASHBACK TO 2009: Penticton Forum showcased “Convening for Action in the Okanagan”

In April 2009, the Penticton Forum showcased three regions where communities are ‘convening for action’ and embracing a ‘regional team approach’ to make a difference. Each regional initiative is developing a vision and road map to change the way that land is developed and water is used.

The Forum was held as an adjunct to the Annual Conference of the BC Water & Waste Association, and was hosted by the Okanagan Basin Water Board and three provincial ministries (Environment, Agriculture, and Community Development). The Forum attracted close to 80 participants from communities around the province, including a contingent of Okanagan elected representatives.

“The Province’s Living Water Smart and  Green Communities initiatives provide a framework and direction for convening for action in the Okanagan, on Vancouver Island and in Metro Vancouver. Each regional initiative is developing a vision and road map for achieving settlement in balance with ecology,” states Glen Brown, an Executive Director with the Ministry of Community Development, and the Deputy Inspector of Municipalities.

“The forum program comprised four modules built around the creating our future and doing business differently themes,” adds Anna Sears, Executive Director of the Okanagan Basin Water Board (OBWB). “The Forum was an exciting day because regional leaders elaborated on new approaches and tools for ‘living water smart’, and changing the way land is developed and water is used.”

The Challenge to Forum Participants: “What Will You Do Differently After Today?”

“We showcased how partnerships, collaboration, innovation and integration are helping local governments in three regions make the best choices for living water smart,” stated Kim Stephens. He was the Forum moderator. He is now the Executive Director of the Partnership for Water Sustainability in British Columbia.

“We challenged participants to apply what they learned at the Penticton Forum; and to make ‘green choices’ that will ripple through time, and will be cumulative in creating liveable communities, reducing wasteful water use, and protecting stream health. Viewed in this context, the success of the Penticton Forum will ultimately be measured by what was set in motion at the Forum.”

The Story of the Penticton Forum

Leading up to the Forum, a series of downloadable documents were published on the waterbucket.ca website. These stories progressively connected the dots and described the elements of the Forum program in order to establish participant expectations. Briefly:

The six are consolidated in a stand-alone document titled Convening for Action and Making Green Choices in British Columbia: The Story of the 2009 Pentiction Forum.

Convening for Action in the Okanagan

“In the Okanagan, we are ‘convening for action’ at four levels to facilitate valley-wide change,” explained Anna Warwick Sears in 2009. She identified these levels as follows:

“The Convening for Action concept can be expanded to encompass all our activities. The Okanagan Basin Water Board (OBWB) is the hub for people to convene around when the topic is water. Our mandate is to communicate and coordinate. In the process, we are tapping into a huge reservoir of volunteers. This is what creates the energy, the will and the momentum to do business differently in the valley.”

The OBWB does not have regulatory authority, but has taxation powers to support its activities, the only example of its kind in the province. Because everyone in the watershed contributes, we focus on projects where everybody benefits.” 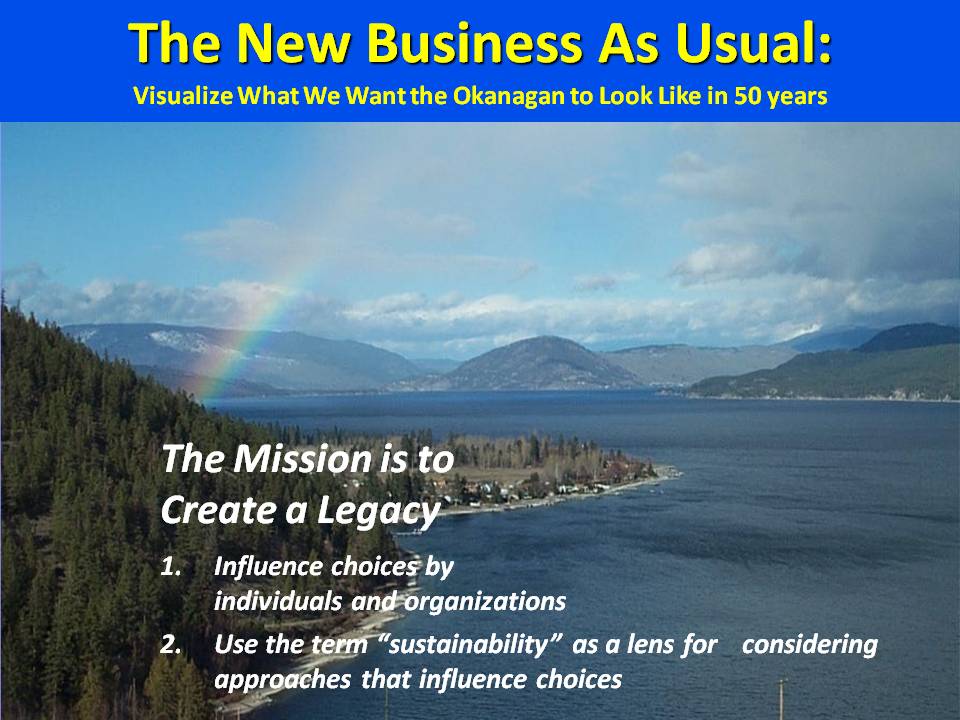