Getting Green Infrastructure “Built Right”: City of Surrey has Moved Beyond Pilot Projects to a Broader Watersheds Objectives Approach

The Champion Supporter designation recognizes government and non-government organizations that are playing a leadership role in the ‘Convening for Action in British Columbia’ initiative. In April 2013, the presentation of a framed “letter of recognition” to the City of Surrey by Kim Stephens of the Partnership for Water Sustainability in BC provided the opportunity to reflect on the historical and provincial significance of successive transformational events hosted by the City over the past decade. 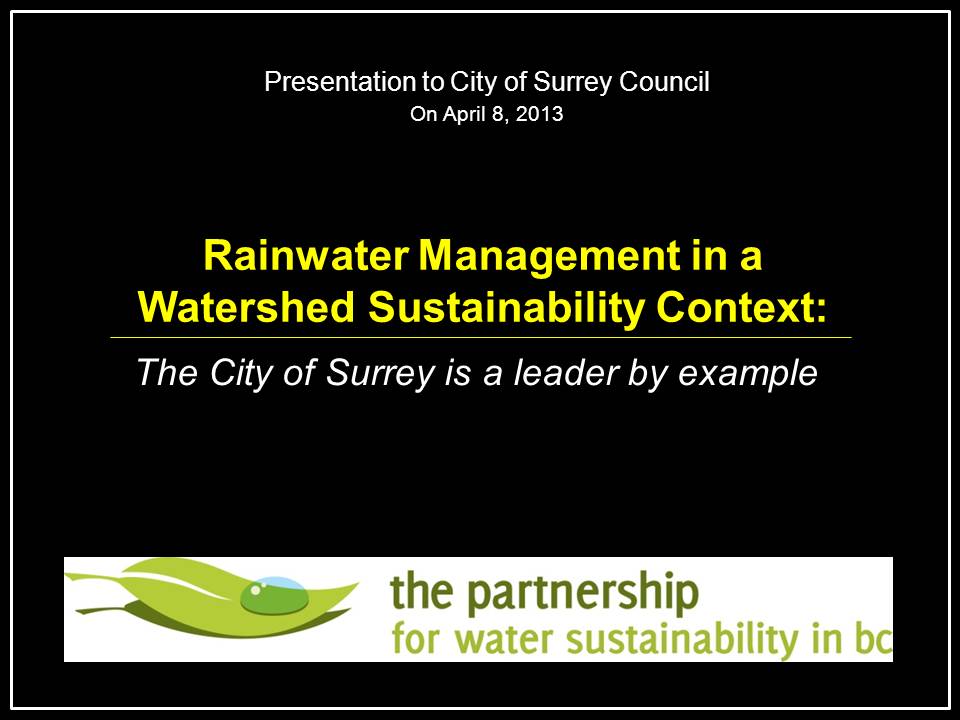 In September 2008, the City of Surrey adopted its Sustainability Charter. This comprehensive framework for implementing a progressive, long-term 50-year vision for a Sustainable City provides the backdrop for watershed-based rainwater management. The Sustainability Charter is a driver for a guiding philosophy that has enabled the City to move beyond green infrastructure pilot projects to a broader watersheds objectives approach.

“The Partnership values our relationship with the City of Surrey and greatly appreciates that the City has hosted regional forums and local government training sessions in 2004, 2005, 2006, 2007, 2008, 2009 and 2011,” stated Kim Stephens when he presented the ‘letter of recognition’ to Mayor Dianne Watts. “Surrey is leading by example and Surrey experience is informing the Georgia Basin Inter-Regional Education Initiative.  Collaboration will help local governments in Metro Vancouver and on Vancouver Island go farther, more efficiently and effectively, to achieve watershed health objectives.”

After presenting the “Champion Supporter” letter of recogition, Kim Stephens took City Council on a trip down memory lane and informed Councillors about the historical and provincial significance of successive transformational events that the City has hosted over the past decade, notably:

“Surrey case studies are foundation pieces for provincial guidance documents and tools. Surrey is a leader by example; and the City’s on-the-ground experience is informing the Partnership’s approach to program development for the Georgia Basin Inter-Regional Education Initiative,” emphasized Kim Stephens in his remarks to Council.

To download a PDF copy of the PowerPoint presentation by Kim Stephens, click on Rainwater Management in a Watershed Sustainability Context: The City of Surrey is a leader by example.

Also, scroll down to learn more about the scope and outcome of each event listed above. Each event has provided a springboard to successive events; and has accumulatively contributed to the evolution of the Convening for Action in British Columbia initiative.

A decade and a half of experience has enabled the City of Surrey to move beyond pilot projects to a broader watersheds objectives approach to implementing green infrastructure and capturing rain where it falls, to protect stream health.

“As we move forward, the new Drainage By-Law endorsed by Council in 2008 is the tool that will enable the City to establish watershed-specific targets for rainwater runoff volume and rate reduction at the development site scale. Now we can determine what makes sense, meets multiple objectives, and results in net environmental benefits at a watershed scale,” stated the City’s Remi Dubé in March 2009.

Scroll down to read a set of set vignettes that provide context for the evolution of the City’s outcome-oriented approach to watershed-based planning. Quotable quotes and links to online resouces are brought forward from stories posted previously on the waterbucket.ca website. These vignettes set the scene for an introduction to the Georgia Basin Inter-Regional Education Initiative.

Branded as Green Infrastructure: How Can We Help You Help Us Help You, the Consultation Workshop was organized for the Metro Vancouver Regional Engineers Advisory Committtee (REAC).

“Achieving higher levels of ecological systems  protection and overall environmental well-being is being successfully  pursued through changes to existing land use regulations, design guidelines and construction standards”,  observed Paul Ham, Chair of the Green Infrastructure Partnership, when he announcing the workshop at a REAC meeting. Prior to his retirement in 2008, he was the General Manager of the Engineering Department for the City of Surrey.

“The workshop atmosphere was upbeat with participants enthusiastically stressing that the number of success stories is growing. There are hurdles to overcome, but they are not insurmountable. The clear message was to make outreach and practitioner education the #1 priority,” Paul Ham stated afterwards.

“The discussion that day in May underscored that there was critical mass for moving forward with an interactive and proactive approach to communication of the design with nature vision; and that this can be achieved through an array of educational tools that can inform change,” added Kim Stephens.

Branded as Celebrating Green Infrastructure: The 2006 Showcasing Innovastion Series in Metro Vancouver, the series was an outcome of the 2005 Consultation Workshop.

“The goal was to build regional capacity through sharing of green infrastructure approaches, experiences and lessons learned as an outcome of ‘designing with nature’. The program was organized as a workshop in the morning followed by field tour in

the afternoon,” explainsRay Fung (District of West Vancouver). He succeeded Paul Ham as Chair of the Green Infrastructure Partnership in 2008.

“This format created opportunities for practitioners to network and share ‘how to do it’ experiences on the ground. The host municipalities set the scene for the field tour by providing comprehensive and in-depth presentations.”

“When we talked to practitioners in local government, it didn’t matter what the region, the message was the same…they told us that they were too busy to communicate with their colleagues in neighbouring municipalities. Yet the irony is that there is much to learn by sharing information with each other. At the end of the day, it seems that it requires a third party to connect people,” adds Paul Ham.

2007 – Beyond the Guidebook Seminar

“The response by the engineering community and others was overwhelming, and came as a welcome surprise Attendance was capped and there was a waiting list. We squeezed as many people as we could into the room,” reported Paul Ham. “The primary attraction was the mini-charrette that we built around Surrey’s Fergus Creek Watershed Plan.”

“We now have the tools and the experience to design with nature and move from stormwater management to RAINwater management”, Corino Salomi told participants. He delivered a presentation that provided

the federal DFO perspective. He summarized by emphasizing that the objective is protect stream health, which is broader than how much volume one can infiltrate on a particular development. “While we need to have volume reduction targets, at the end of the day it is how effectively we apply the suite of available rainwater management tools that will ultimately determine whether we will succeed in protecting stream health at a watershed scale.”

“The learning outcome for the mini-charrette was that participants would be able to express how green infrastructure policies and practices can be successfully implemented at the site scale to protect stream health at the watershed scale. Participants worked in groups to resolve ‘how to do it’ implementation issues related to four (re)development scenarios,” recalls the City of Surrey’s Remi Dubé. He designed and presided over the mini-charrette.

Branded as Living Water Smart and Making Green Choices to Create Liveable Communities and Protect Stream Health, the Forum adressed the HOW question as it pertains to green infrastructure: HOW will the City of Surrey get it built right; and HOW will a consistent regional approach be achieved in Metro Vancouver?

“Once we know what we want our watersheds and neighbourhoods to look like, the next step is to decide what the tools are that will get us there,”

states Vincent Lalonde, General Manager of the Engineering Department for the City of Surrey. He succeeded Paul Ham in 2008. “All of us ….whether we are regulators, developersor designers ….need to understand and care about the goal if we are to create the future that we all want.”

“Surrey hosted the Forum because we wanted to start a dialogue in this region between policy-makers and project implementers. We approached the program design from a shared responsibility perspective. We explored how policy and legal tools can help developers, regulators and designers collaborate to ensure responsible outcomes.”

The story of the Forum is told in a series of six stories published weekly on the Waterbucket website. These describe the elements of the Forum program, and are consolidated in a stand-alone document titled The Story of the 2009 Metro Vancouver Water Balance Model Forum: Living Water Smart and Making Green Choices to Create Liveable Communities and Protect Stream Health

Branded as the Course on the ‘ISMP Course Correction’, the 2-day pilot provided peer-based learning on how to develop Integrated Stormwater Management Plans (ISMPs) that connect the dots between land use planning, watershed health and infrastructure asset management. Regulatory requirements mandated by the Minister of Environment in 2011 provided a driver for implementing a ‘course correction in the way ISMPs are developed in Metro Vancouver.

“The purpose of the pilot course hosted by Surrey was to have both local governments and consultants get together to discuss ISMPs and learn about the various ways they can be delivered. Many local governments were struggling with having these done in a fashion that is meaningful for their community – we hoped that the course would open minds and lead to application of new ideas,” states Carrie Baron, Surrey’s Drainage and Environment Manager.

“The course was designed to assist local governments, other Ministries and consultants delivering the ISMPs to understand options available. Local governments in the Metro Vancouver region are required to have ISMPs completed for all their watersheds by 2014, with possible extension to 2016.  Many had not started any in 2011, but would be

shortly.  Others had done some, but still had questions in terms of delivery and outcomes.”

“To guide those about to embark upon an ISMP process, the Partnership released the Summary Report for ISMP Course Correction Series in February 2011,” states Kim Stephens. “It provides a consolidated reference source . The Summary Report is actually a compendium: a front-end plus all five documents in the ‘ISMP Course Correction Series’ that we released in Fall 2010. The front-end is complete with a set of five recommendations.”

Also, two guidance documents were released as part of the course curriculum:

Primer on Rainwater Management in an Urban Watershed Context – Provides an understanding of how a science-based approach has evolved since the mid-1990s.

The focus of the Georgia Basin Inter-Regional Education Initiative is on actions related to land use and watershed health, with emphasis on the ‘how-to’ details of integration and implementation.

“Collaboration is the pathway to a consistent approach to water sustainability and green infrastructure policies and practices within and between regions. Yet there is no formal mechanism to enable or facilitate inter-regional collaboration. The Partnership fills this gap,” states Peter Law, Partnership Director. Formerly with the Ministry of Environment, he was Chair of the inter-governmental Steering Committee (2000-2002) that developed Stormwater Planning: A Guidebook for British Columbia.

“The initiative will help all regions bridge the “implementation and integration” gap. Sharing, collaboration, alignment and consistency will accelerate effective watershed restoration and/or protection within each region. Everyone will go farther, more efficiently and effectively.”

“A program goal is that local governments will leverage, and be more effective, with the same resources.”

Click on Rainwater Management in a Watershed Sustainability Context: About the Georgia Basin Inter-Regional Education Initiative for “Integrating the Site with the Watershed and the Stream”