Convening for Action in the Thompson Rivers Region

September 30, 2011 - Posted in Convening for Action in the Thompson Rivers Region, Uncategorised

Towards a Regional Team Approach

“The Partnership’s Advisory Committee wished to replicate our ‘convening for action’ approach on Vancouver Island in another region of the province.  We decided that the southern interior would be a good choice.  Ron Smith, a member of the committee, was asked to lead the work on establishing this initiative. We branded it Convening for Action in Thompson Rivers Region (CATRR),” states Tim Pringle, Partnership President.

It Starts with a Conversation

“Formerly with the Province in a senior position, Ron Smith has over 25 years experience in water/land management in the region. He contacted individuals with water/land responsibilities at different levels of government, and non-government, agricultural industry and academia representatives.”

“The discussions brought out a concern about water sustainability and land use practices in this semi-arid part of the province.  These individuals provided insight into the issues they and their organizations faced.  A strong driver in support of an initiative to collaborate was that almost without exception organizations are so strapped for resources that they are challenged to efficiently and effectively meet their mandates.”

“The insights that Ron gained from these discussions helped the Partnership to develop an agenda that would incorporate participant input and seek commitment to a regional team approach.   BC Hydro Power Smart provided financial support and hosted an exploratory session on September 20, 2011 at their offices in Kamloops. The outcome of that session is summarized in a short-form ‘consultation report’.”

Click on Shared Responsibility Underpins a Regional Team Approach to Creating Our Future in British Columbia, released in December 2009 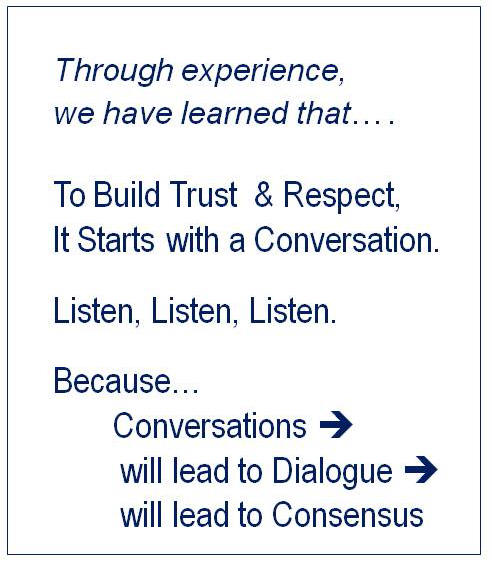