Using Professor Patrick Condon’s recent book Seven Rules for Sustainable Communities as a basis for the course focus, and supported with emerging civic thinking about Vancouver’s future urban patterning (2050 horizon) contributed by the City of Vancouver’s Senior Urban Designer Scot Hein, the UBC Urban Studio will produce a multi-layered vision for the balance of the city outside of the metro core.

“Questions of how to green the North American economy, create a green energy and transportation infrastructure, and halt the deadly increase in greenhouse gas buildup dominate our daily news. Related questions of how the design of cities can impact these challenges dominate the thoughts of urban planners and designers across the U.S. and Canada,” states Patrick Condon.

“Patrick’s book clearly connects the form of our cities to their ecological, economic, and social consequences. The book takes on this breadth of complex and contentious issues and distills them down to such convincing and practical solutions. And it vividly compares and contrasts the differing experiences of U.S. and Canadian cities,” states Scot Hein.

“While ambitious in scope, the methodology for the intended academic experience/outcomes will be simple and will build upon prevailing best urbanism practices and recognized strategies for growth,” explains Patrick Condon.

“The primary course deliverable will be a plan framework with students, working individually and in teams, clarifying and documenting future city wide urban systems (the plan layers) for open space and connectivity including natural attributes, hierarchy of movement and respective locations/modes, land use and built form, including scale and typological appropriateness as well as special opportunities for district energy, urban agriculture and cultural celebration.”

“Prevailing localized neighbourhood centres and other emerging urban villages, along with predominant arterial corridors, will be more specifically investigated to reveal

“Students, after completing designs for specific geographic areas, will assemble into a cogent overall vision/plan framework which is intended to be published for a wider discussion following the conclusion of the studio.”

NOTE: Scot Hein is an Adjunct Professor in the UBC School of Community and Regional Planning. In addition to his local government career, he has established environmental awareness/built environment education programmes in Canada and the United States and has served as Canada’s representative for this work.

About the UBC Urban Studio:

Urban Studio is a UBC graduate course that uses urban design to explore emerging issues within the changing physical fabric of the Metro Vancouver Region and larger Georgia Basin (the trans-border watershed that includes the southern BC and north Washington coastal areas).

The course integrates the three design and planning disciplines of Landscape Architecture, Architecture, and Planning, and has been offered since 1993.

“Basically I asked Kim to talk to the issues as he sees them that I outline in the last two chapters of my book: Chapter 7, Create a linked system of natural areas and parks; and Chapter 8, Invest in lighter, greener, cheaper, smarter infrastructure. Kim Stephens is an engineer who gets it. He is passionate and committed,” Patrick Condon told his students.

“Patrick’s invitation provided me with an opportunity to introduce his students to Beyond the Guidebook 2010. This allowed me to provide them with a window into the local goverment setting; and elaborate on what it takes to build consensus and create lasting change on the ground. The full title is Beyond the Guidebook 2010: Implementing a News Culture for Urban Watershed Protection and Restoration in British Columbia,” continues Kim Stephens.

“Patrick Condon is a master at creating pictures of what a desired regional future could look like. The dimension that I wanted to impart to his students is what it takes to get buy-in from local government and the community for an outcome-oriented vision.”

“A picture is worth a thousand words. Yet it needs to be supported by actions that are readily understood and accepted; and that can and will be implemented in the normal course of doing business. At the end of the day, the big picture must be complemented by a set of little pictures that show how the big picture can be achieved on the ground. That is the local government reality.”

Learning from the Bowker Creek Precedent

“So it was important that I tell Patrick’s students the story of how for the past decade in BC we have been advancing change incrementally through an educational approach. This is what is captured in Beyond the Guidebook 2010. The takeaway from my lecture is that the class project will benefit from the experience and lessons learned in developing the Bowker Creek Blueprint in the Capital Regional District.”

“Based on my experience over the past 30-plus years, the Bowker Creek Initiative has gone well beyond any other plan in terms of how it has achieved consensus and galvanized commitment to move from planning to action on the ground,” concludes Kim Stephens.

“Kim made an enlightened contribution to our class.  The lecture was very inspiring,” states Scot Hein.

To download a copy of the PowerPoint presentation that guided the lecture discussion, click on Kim Stephens introduces Beyond the Guidebook 2010 to UBC urban design students 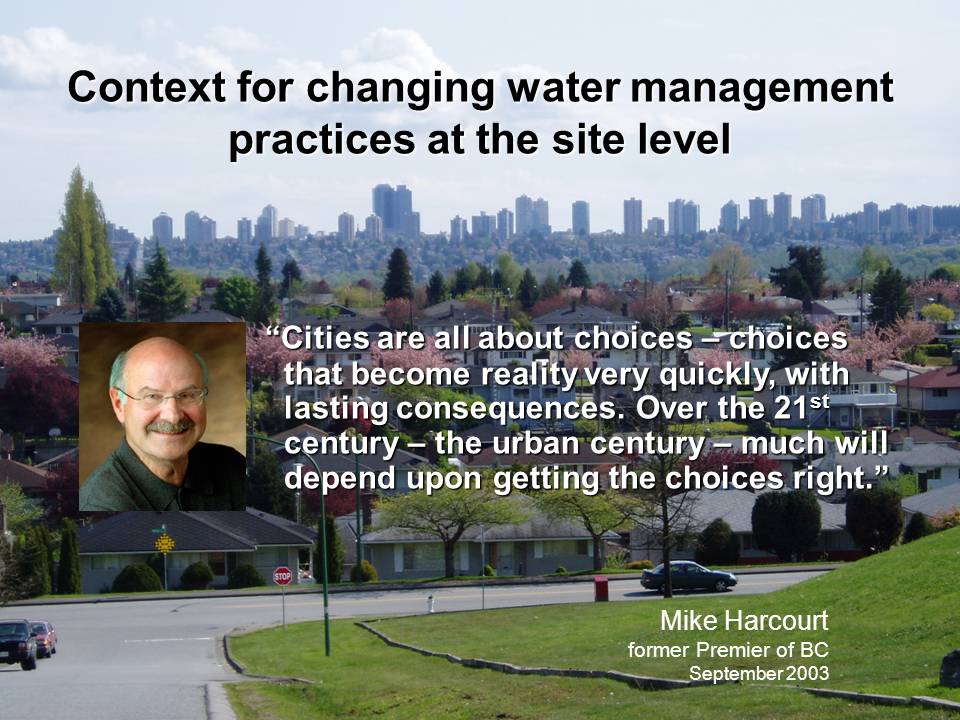 In October 1997, a focus group workshop convened by the Union of British Columbia Municipalities set in motion a chain of outcomes that culminated in Stormwater Planning: A Guidebook for British Columbia, released in June 2002. This was a catalyst for change that has resulted in British Columbia achieving international recognition as a leader in implementing green infrastructure.

Beyond the Guidebook 2010 is the story of what has been accomplished on the ground over the past decade, through partnerships and collaboration, under the umbrella of the Water Sustainability Action Plan for British Columbia.