2007 Beyond the Guidebook Seminar: Resources and Successes for Protecting Stream Health in British Columbia

Beyond the Guidebook: Green Solutions that Protect Stream Health

Building on the interest in rainwater / stormwater modelling that led to a province-wide series of technical seminars being organized through the continuing education program of  the Association of Professional Engineers and Geoscientists of British Columbia (APEGBC), the Green Infrastructure Partnership  teamed with APEGBC  to deliver a one-day seminar in November 2007 on how to implement ‘green solutions’ that actually protect stream health.

“Aligning our efforts with APEGBC to deliver the seminar is timely”, stated Paul Ham, GIP Chair, when the seminar was announced. “The seminar will be a month after the last event in the 2007 Showcasing Green Infrastructure Innovation Series.  The goal of the series is to share green infrastructure approaches, tools, experiences and lessons learned as an outcome of designing with nature. As a logical next step, the seminar creates a learning opportunity to help practitioners move from awareness to action.”

Guidebook Premise: Land Development and Watershed Protection can be Compatible

“The seminar is the next step in the rollout of Beyond the Guidebook: Context for Rainwater Management and Green Infrastructure in British Columbia. This guidance document was released in June 2007,” continued Paul Ham.

“Beyond the Guidebook is an inter-governmental initiative that is advancing a runoff-based approach and tool – the ‘Water Balance Model powered by QUALHYMO’ – to help local governments achieve desired urban stream health and environmental protection outcomes at a watershed scale.”

“Beyond the Guidebook builds on the foundation provided by Stormwater Planning: A Guidebook for British Columbia. Released in 2002, its underlying premise that land

development and watershed protection can be compatible represented a radical shift in thinking. The Guidebook recognized that water volume is something over which local government has control through its infrastructure policies, practices and standards,” added Kim Stephens.

He is the Seminar Moderator and Program Coordinator for the Water Sustainability Action Plan for British Columbia. He was the principal author of the Guidebook.

About the Program Design

To read the complete story and learn about the program design, click on Resources and Successes for Protecting Stream Health in British Columbia.

Original story posted on the Green Infrastructure Community-of-Interest in November 2007. 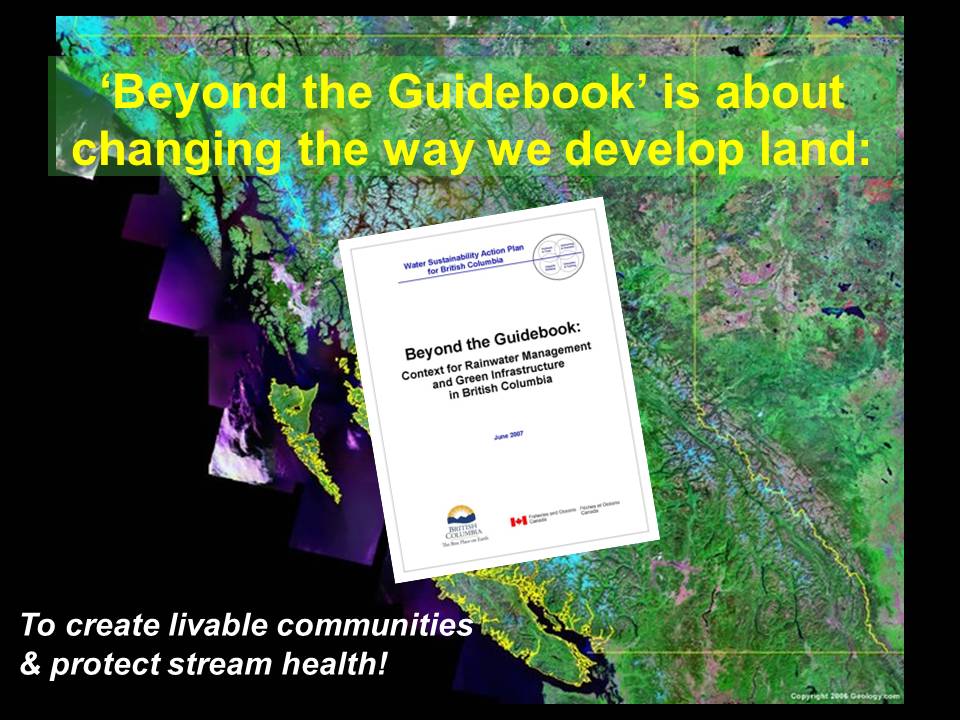