CHAMPION SUPPORTER: recognition of the Township of Langley (October 2017)

On October 2, 2017 Ted van der Gulik and Kim Stephens of the Partnership for Water Sustainability in BC presented the Mayor and the Council of the Township of Langley with a framed “letter of recognition” as a Champion Supporter. The Township is a leader by example in the Metro Vancouver region. 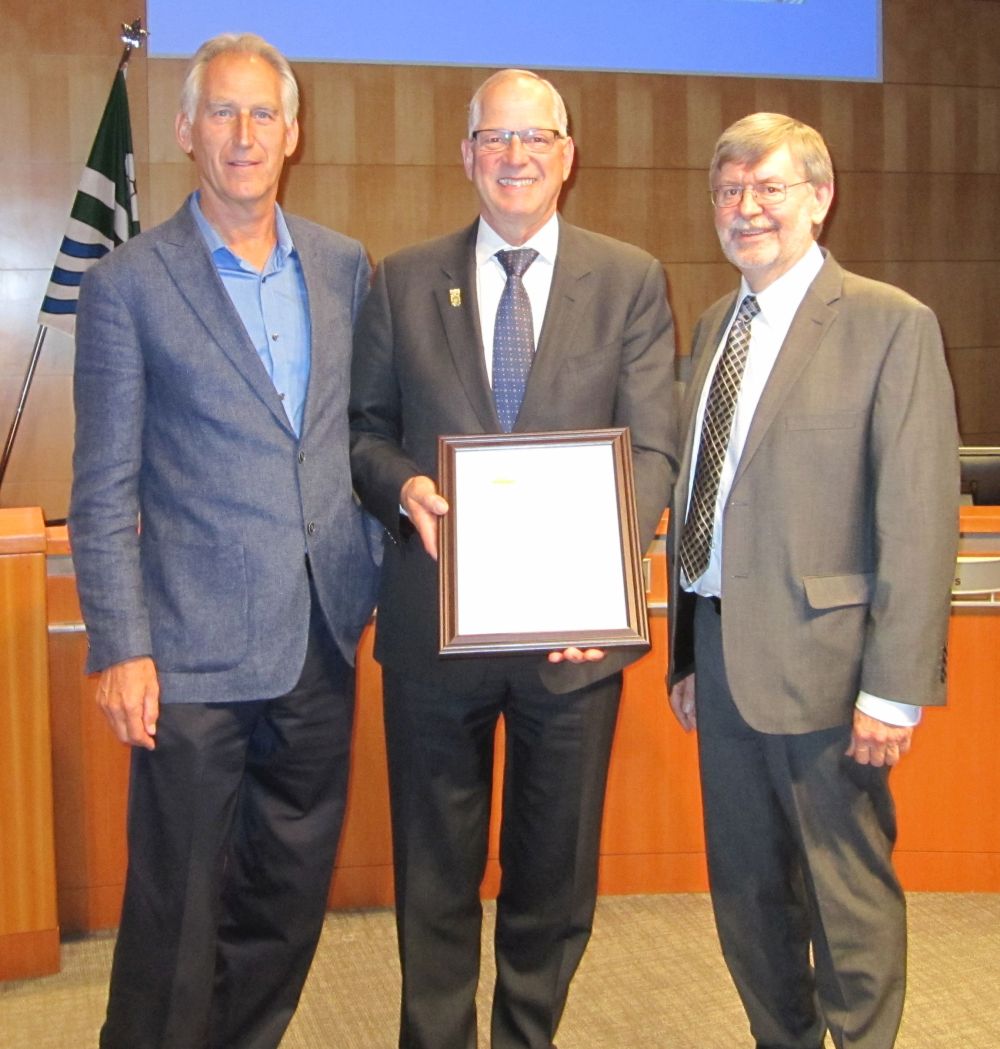 The Champion Supporter designation is the Partnership’s way of formally recognizing government and non-government organizations that provide the Partnership with ongoing financial and/or in-kind support; and also play a leadership role in the “convening for action” initiative.

The Partnership is a not-for-profit society and our partners mostly represent local governments. Hence, the Township of Langley’s demonstrated commitment to achieving a shared vision for water sustainability in a local government setting is vitally important to the Partnership’s capability to carry out its mission.

The Township of Langley has supported the work of the Partnership since 2005, in particular the Water Balance Model initiative. In 2007, for example, the Township co-hosted the Metro Vancouver Showcasing Green Infrastructure Innovation Series.

Successful ‘sharing & learning’ influenced everything that has followed, helping to lay the groundwork for the Georgia Basin Inter-Regional Education Initiative, launched in 2012.

Design with nature, a whole-system approach, learn by doing and adapt. These three phrases capture the essence of how the Township builds neighbourhoods. Their record of success to date is impressive.

Sharing the Township’s story with others helps the Partnership achieve our educational mission. Township experience demonstrates the critical success factors that must be in play for communities to achieve the vision for Sustainable Watershed Systems, through Asset Management.

The stewardship ethic for creating liveable neighbourhoods in Langley is shaped by “cathedral thinking”, that is – a far-reaching vision, a well thought-out blueprint, and a shared commitment by elected representatives, staff and community to long-term implementation. Well done!

Download the Agenda for the Council Meeting on October 2, 2017.

Download Green Infrastructure Innovation: Langley Township is a Leader by Example to view the PowerPoint presentation by Kim Stephens.