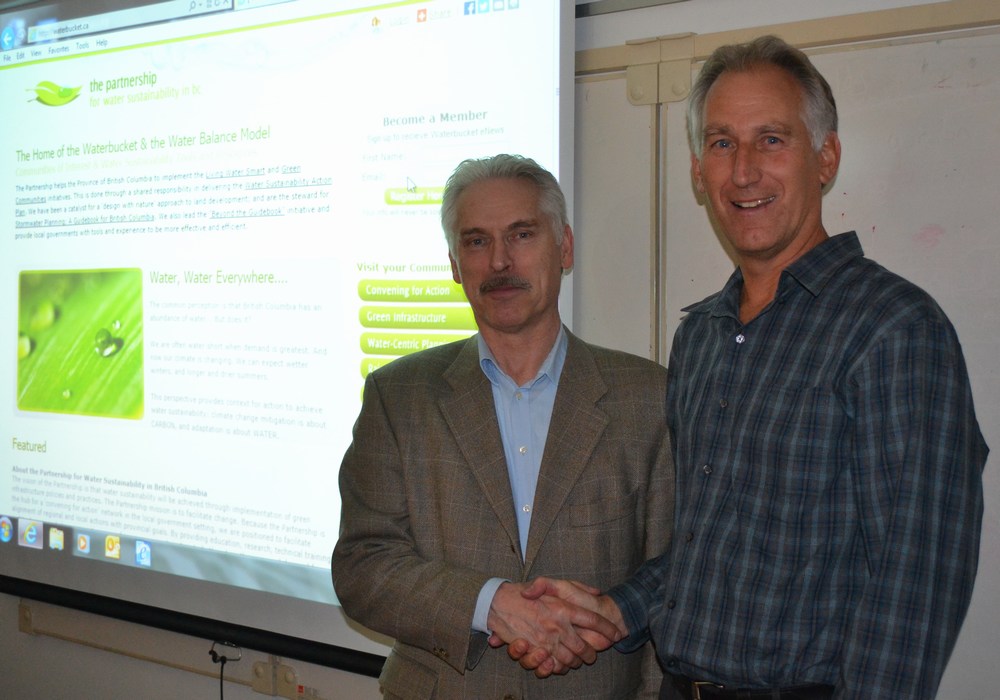 “We sometimes wonder and reflect whether the famous ‘Ted Talks’ around innovation and new ideas was named after Ted van der Gulik,” says Eric Bonham

When the Partnership’s Directors met on March 6, they named Ted van der Gulik as President of the Partnership for Water Sustainability in BC. In February, he had retired from the Ministry of Agriculture, where he was the Senior Engineer. He succeeds Tim Pringle, the Partnership’s Founding President.

Ted van der Gulik will continue to play a leadership role in provincial initiatives, in particular as Chair of the Water Balance Model program.  Also, he will represent the Partnership in collaborating with the Ministry of Agriculture for ongoing implementation of the Agricultural Water Demand Model province-wide.

Visionary and An Effective Bridge-Builder

“Ted van der Gulik’s successful 35-year career in government has been defined by his passion and vision to contribute to the improvement of water use, water efficiency, conservation and the long-term sustainability of the water resource with its many facets and challenges, throughout British Columbia,” observed Eric Bonham when he reflected on the qualities that Ted van der Gulik brings to his leadership role as the second President of the Partnership for Water Sustainability in British Columbia.

(Eric Bonham is a founding member of the Leadership Team for the Partnership for Water Sustainability in British Columbia. During his career in government, Eric Bonham was a Director in two Ministries – Environment and Municipal Affairs. He first met Ted van der Gulik in the early 1980s.)

“Known for his initiative and creative ideas and that invaluable quality of recognizing the limitations of government policy, Ted has always been prepared within the system to ‘think outside the pipe’ and find solutions for the common good, and as a result, has provided an incredible public service to British Columbia.”

“Whether in the Kootenays, Okanagan Valley, Northern BC, Lower Mainland or Vancouver Island, Ted has long been known as the ‘go to guy’ on water issues relating to agriculture. We sometimes wonder and reflect whether the famous ‘Ted Talks’ around innovation and new ideas was named after Ted van der Gulik.”

“Early in his career, Ted realized the importance of collaboration and involvement with organizations outside of government, such as the Irrigation Industry Association of BC, the Partnership for Water Sustainability BC, the Okanagan Water Stewardship Council, and the BC Water and Waste Association, to name but some.”

“Ted has been an active participant and leader through time in each one of these organizations; and his understanding of their value and role in collaboration with government soon established his reputation as an effective bridge builder. Ted van der Gulik has retired from his day job in government, yet his mission to make a difference in British Columbia continues via his leadership within the Partnership for Water Sustainability,” concluded Eric Bonham.