About the City of Surrey

Surrey is British Columbia’s second-largest city by population after the city of Vancouver, with  a population of approximately 0.5 million. In the 1980s and 1990s, Surrey witnessed unprecedented growth, as people from different parts of Canada and the world, particularly Asia, began to make the municipality their home. Surrey is projected to surpass the city of Vancouver as the most populous city in BC by 2020 – 2030.

The Sustainability Charter is the City of Surrey’s comprehensive framework for implementing a progressive, long-term 50 year vision for a Sustainable City. City Council unanimously adopted the Charter in September 2008. The Sustainability Vision incorporates this statement:

“Surrey values and protects its natural environment through stewardship of its rich tree canopy, and enhancement of its natural areas and biodiversity.”

This provides over-arching guidance for connecting the dots between land use planning and protection of watershed health. An implementation tool is the regulatory requirement for Integrated Stormwater Management Plans (ISMPs). The City’s approach in leveraging the ISMP process to achieve multiple objectives is outcome-oriented: “What do we want this place to look like in 50 or 100 years, and how will we get there?”

Message from the Mayor:

“The Surrey Sustainability Charter is a commitment by the City to place the principles of social, environmental and economic sustainability as the foundation of all decisions we make. It is about making the right choices and doing the right things,” states Mayor Dianne Watts in the foreword.

“The Charter provides a comprehensive lens through which we will view all future initiatives, programs and plans. It provides us with a framework to best develop and manage Surrey’s human and physical resources to create a strong, sustainable city.” 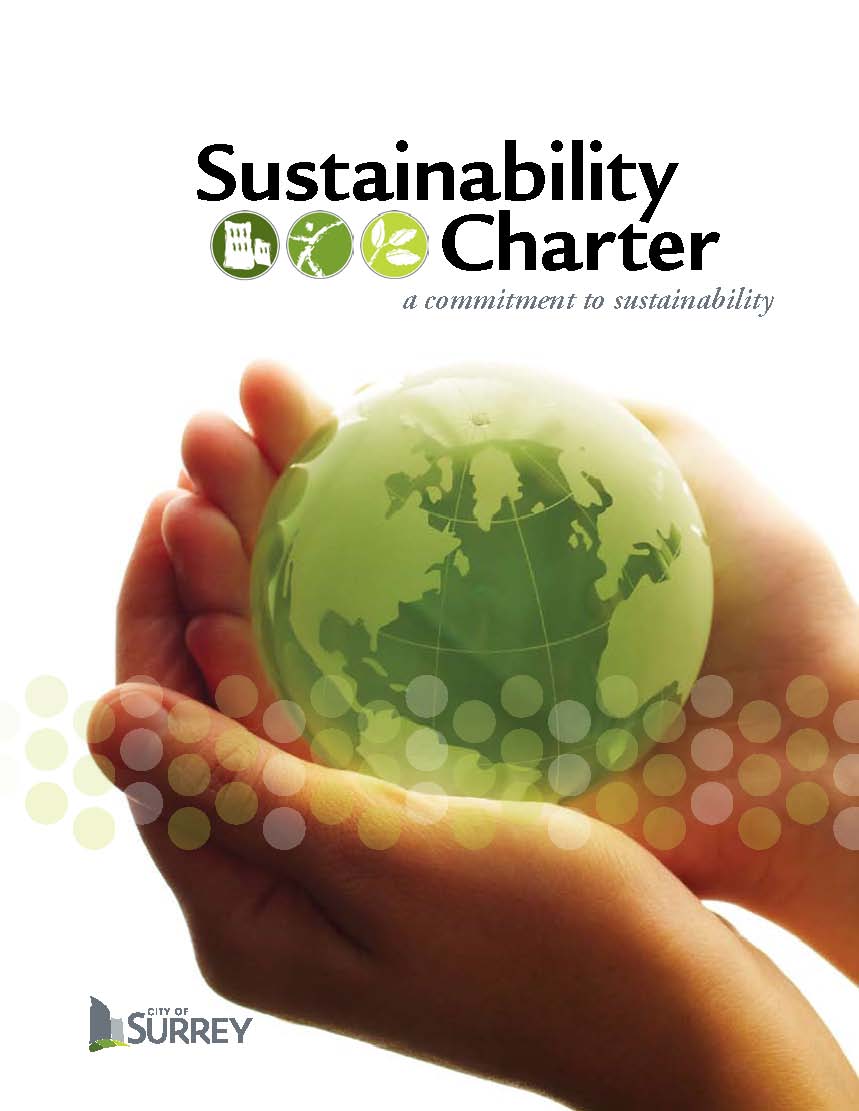 The Champion Supporter designation recognizes government and non-government organizations that are playing a leadership role in the ‘Convening for Action in British Columbia’ initiative.

Recognition of the City of Surrey

“The Partnership for Water Sustainability in BC is pleased to recognize the City of Surrey as a Champion Supporter,” stated Kim Stephens, Partnership Executive Director, when he presented Mayor Dianne Watts and Council with a framed letter of recognition. “The City of Surrey’s long-term commitment is helping the Partnership advance the vision for achieving watershed sustainability through implementation of green infrastructure policies and practices.”

“The City is a founding partner and champion supporter of the Water Balance Model initiative. Also, the City’s Paul Ham served as Chair of the Green Infrastructure Partnership initiative from 2004 until his retirement in 2008.”

Presentation of the “letter of recognition” to Surrey City Council provided the opportunity to reflect on the historical and provincial significance of successive transformational events hosted by the City over the past decade. To download a PDF copy of the PowerPoint presentation by Kim Stephens, click on Rainwater Management in a Watershed Sustainability Context: The City of Surrey is a leader by example.