Metro Vancouver (highlighted area) is bounded by the Strait of Georgia to the west, Coast Mountains to the north, Fraser Valley to the east and the U.S. to the south. (Image Credit: BC Institute of Technology)

About the Metro Vancouver Region

Metro Vancouver is the name of a political body and corporate entity designated by provincial legislation as one of the regional districts in British Columbia. The organization was formerly known as the Greater Vancouver Regional District (GVRD), and that name is still the official name and remains in common colloquial use, especially in the acronym form.

Metro Vancouver is under the direction of 24 local authorities; it delivers regional services, sets policy and acts as a political forum. The region’s most populous city is Vancouver, but Metro Vancouver’s administrative offices are located in the City of Burnaby.

The term “Metro Vancouver” can also be used to refer to the geographic territory approximately equivalent to the territory under the authority of the organization Metro Vancouver. This term is used increasingly in favour over the colloquial term “Greater Vancouver“. Both terms generally imply reference only to the urban and suburban areas of the region – wilderness and outlying rural regions within the regional district are generally excluded.

Completed in 2010, the Metro Vancouver region’s Integrated Liquid Waste & Resource Management Plan (i.e. ‘the Integrated Plan’) has established the framework for moving beyond regulatory compliance and implementing a ‘design with nature’ philosophy that is outcome-oriented and achieves the Sustainable Region Vision.

The Integrated Plan is aligned with, and supports, the provincial policy framework established by the Living Water Smart and Green Communities initiatives. Furthermore, the strategy for managing liquid discharges and rainwater as resources has two tracks: End-of-Pipe and At-the-Source.

“The plan deals with the pressures of an increasing population while planning to bring an aging infrastructure up to modern standards,” stated Environment Minister Terry Lakes in June 2011 when he announced that the Province had approved the plan. He also strengthened the plan by imposing conditions that expand what is expected of Metro Vancouver’s member municipalities vis-à-vis rainwater management.

“Since 2002, Metro Vancouver has formally put the concept of sustainability at the centre of its operating and planning philosophy, and has committed itself to be a leader. The Integrated Plan for managing rainwater as a resource now provides the means to translate the Sustainability Framework into tangible actions on the ground,” notes Mayor Greg Moore of the City of Port Coquitlam. He is Chair of the Metro Vancouver Board. 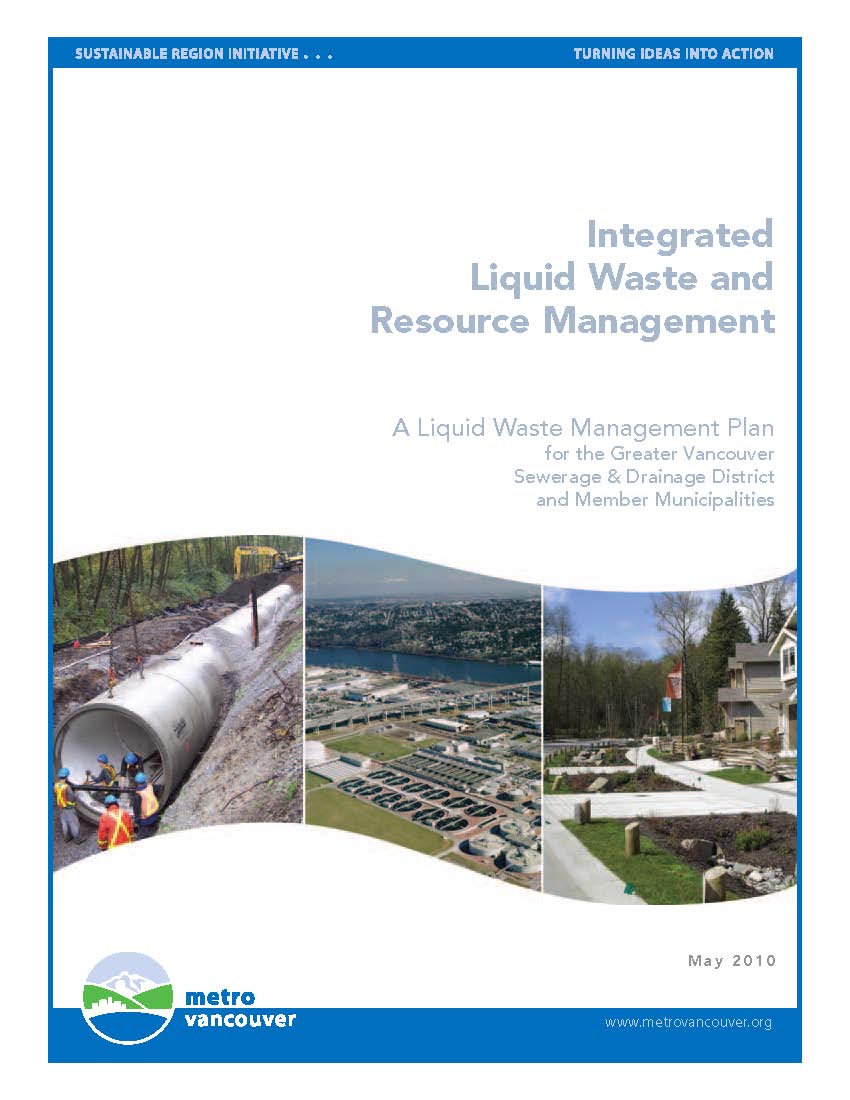 “The Champion Supporter designation is the Partnership’s way of formally recognizing government and non-government organizations that provide the Partnership with ongoing financial and/or in-kind support; and also play a leadership role in the ‘convening for action’ initiative,” wrote Tim

Pringle, President of the Partnership, in a letter to the Regional Board.

“We are pleased to inform the Chair and Directors that the Metro Vancouver Regional District  is hereby deemed to be a Champion Supporter of the Partnership for Water Sustainability in British Columbia.”

important to the Partnership’s capability to carry out our mission in delivering the Water Sustainability Action Plan for BC. Without the historical and ongoing contributions of an organization such as Metro Vancouver, there would be no Partnership and no assets such as the Water Balance Model (WBM) decision support tool and waterbucket.ca website,” adds Kim Stephens, Partnership Executive Director.

“A decade ago, Metro Vancouver was a founding partner in the WBM initiative. Over the years, Metro Vancouver has hosted meetings, working sessions and forums organized by the Partnership. More recently, a $50,000 grant from Metro Vancouver towards the WBM Express for Landowners leveraged almost $250,000 in co-funding.”

“Looking ahead, we anticipate that the Express and related ‘convening for action’ collaborative initiatives will help the Metro Vancouver region and its member municipalities better deliver on regulatory compliance pursuant to actions specified in the region’s Integrated Liquid Waste & Resource Management Plan,” observes Ted van der Gulik, Chair of the Water Balance Model Partnership. He is the Senior Engineer in the Ministry of Agriculture.

“Metro Vancouver also co-funded development of the Water-Centric Planning Community-of-Interest. This was undertaken in collaboration with the Province. Rainwater Management is the third community-of-interest developed with Metro Vancouver financial support. Funding was provided via the Stormwater Interagency Liaison Group in 2005. The Rainwater Management  COI has evolved into the communication platform for the Water Balance Model Partnership.”