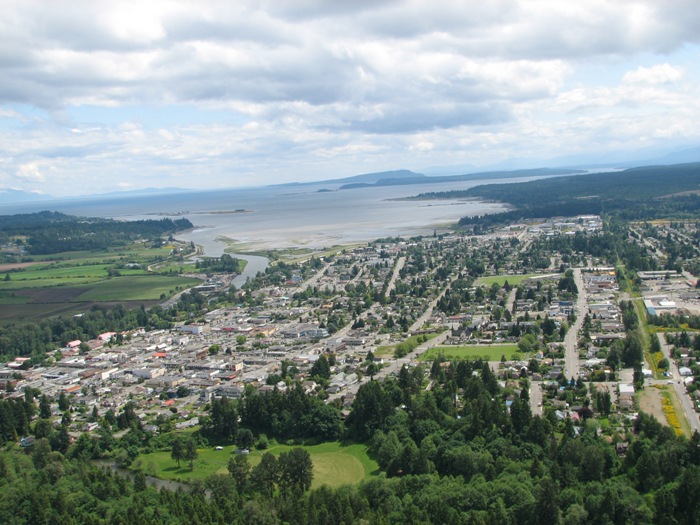 About the City of Courtenay

Courtenay is a municipality on the east coast of Vancouver Island. With a population of over 24,000, it is the largest city (and only “city”) in the area commonly known as the Comox Valley, and it is the seat of the Comox Valley Regional District which in 2008 replaced the Comox-Strathcona Regional District. Courtenay has experienced rapid population growth over the past two decades.

Courtenay is just 4 km west of the town of Comox, 7 km northeast of the village of Cumberland, 5 km  northwest of the unincorporated settlement of Royston, and 108 km northwest of Nanaimo.

The Comox Valley is a provincial demonstration region for “convening for action” and a “regional team approach”. The City of Courtenay has played a consistent leadership role within the regional team. In 2003, the City was a founding partner and early proponent for the provincial Water Balance Model initiative.

Since 2007, the City has been a champion for the CAVI-Convening for Action on Vancouver Island initiative. The City hosted Comox Valley forums and/or Learning Lunch Seminar Series in 2007, 2008, 2010 and 2012. The commitment of the City is underscored by the fact that the City’s Derek Richmond is the current CAVI Chair.

“CAVI began as a grassroots collective partnership committed to achieving settlement in balance with economy and ecology, starting with water-centric planning.  CAVI was formally launched in 2006 at a consultation workshop held in conjunction with the Water in the City Conference,”states John Finnie, CAVI Past-Chair (2006-2011).

“The CAVI program is currently being implemented under the umbrella of the Partnership for Water Sustainability in British Columbia.  CAVI continues to reach out to groups that share a vision for Vancouver Island, with the goal of creating a roundtable of partnerships.”

The story of Courtenay’s contribution to the ongoing success of the CAVI-Comox Valley Regional Team is told elsewhere on the waterbucket.ca website. Click on the links below to read about the annual Learning Lunch Seminar Series.

During the period 2008 through 2011, the series were open to all. In 2012, however, the process was an internal one. The goal was to move from awareness to action. An outcome was a Draft Landowners Guide for Water-Wise Development in the Comox Valley.

City is a Champion Supporter of the Partnership for Water Sustainability

At the meeting of Council on December 10, 2012, Council received a letter from the Partnership for Water Sustainability informing Mayor and Councillors that the Partnership had formally recognized as a Champion Supporter.

“The Champion Supporter designation is the Partnership’s way of formally recognizing government and non-government organizations that provide the Partnership with ongoing financial and/or in-kind support; and also play a leadership role in the ‘convening for action’ initiative,” wrote Kim Stephens, Partnership Executive Director.

“The letter recognizing the City as a Champion Supporter of the Partnership for Water Sustainability in BC was very well received by City Council. The ‘good news’ nature of this agenda item generated about five minutes of conversation and statements from Council members,” reports Kevin Lagan, the City’s Director of Operational Services.

Mayor Larry Jangula congratulated staff, in particular Derek Richmond for his work as Chair of CAVI, and also Kevin Lagan. “You have both produced excellent work on water sustainability within the City and for the province in general,” stated the Mayor.

Councillor Ronna-Rae Leonard said: “This is a real accolade that Courtenay has received relating to water sustainability for both the City and the Georgia Basin.”

Councillor Jon Ambler commented: “That it is important the public sees a practical and tangible outcome for the work that the City requires and the development community produces to improve rainwater management.”

“I was surprised and very pleased to see the City and staff recognised for the work we have performed on Rainwater Management and Water Sustainability,” stated Kevin Lagan in response to the comments from Mayor and Council.

“This supports and complements the over-arching goal of the Comox Valley CAVI group to collaborate as a regional team towards a consistent approach of planning and acting on a watershed basis,” added Derek Richmond, Manager of Engineering.

“We value our relationship with the City and greatly appreciate that you have hosted Comox Valley forums and/or Learning Lunch Seminar Series.” wrote Kim Stephens.

“This year’s set of Comox Valley Regional Team working sessions constituted “proof of approach” for the Inter-Regional Education Initiative on Rainwater Management in a Watershed Sustainability Context (IREI). The experience gained will help facilitate full-scale implementation on both sides of the Georgia Basin in 2013 and beyond.”